Three people told me the same thing about this movie.  It’s super weird, and I wouldn’t like it.  Now, I’m the guy who devoured the recent Twin Peaks and enjoy things like Bottom Of The World (though admittedly, Jena Malone was the main reason I watched it!), so weird … kinda my thing, right?  I could never get a straight answer to why, though.  The other thing they told me: you need to go and see it!  So I did, partly to recover from the system shock of Kingsman: The Golden Circle!

I only knew a couple of other things about this new movie from Darron Aronofsky (Black Swan, Requiem For A Dream), and it was mostly that it starred Jennifer Lawrence (Passengers, The Hunger Games “quadrilogy”) and Javier Bardem (Skyfall, No Country For Old Men) as a married couple living in a  remotely located house, and are visited by a mysterious couple, played by Ed Harris and Michelle Pfeiffer.  That was about it.  Well, that and the limp box office.  Well that, and a story that the movie had recently been booed at the Venice Film Festival, where my daughter has just returned from.  Intriguing, I thought.  Why would I want to see a movie that has sunk at the cinema, been booed at an international film festival, starring two actors I’m not strictly fans of (per se), that I was told I wouldn’t like?  But like I said, I went to see it.

And it turned out I liked it quite a bit!  And most of why I did is because it both confounded my expectations, and headed in a direction that I never expected.

I’ll be more than honest here, from the start I predicted a routine horror movie.  The opening scenes of a woman burning, a charred house – they made me think I was in for a by the numbers “reincarnated witch” storyline, then, when Ed Harris’s creepy, unnamed character appeared, I thought – “lame Rosemary’s Baby riff!”  It’s absolutely neither, because  Mother! is an allegorical tale from start to finish.  The great thing, though, is that it doesn’t feel like it until the final act of the movie which, indeed, gets super weird.  Up to that point, it’s weird in spots, but more like an unconventional supernatural mystery/thriller, as in this here trailer.

I admit that going in, a colleague (one of the three aforementioned people) told me it felt Biblical in places.  Of course, that could mean a lot of things, but without being armed with that descriptor, it may have taken me until a lot later to guess what might be happening in the movie than what it did.  That moment came as the result of an earlier scene featuring a naked Ed Harris, and a violent scene that included Domhnall Gleeson (Star Wars: The Force Awakens, Ex Machina, American Made).  As it turned out I think I was right, but it would be a dick move to tell you what it was, because you have to see this kind of movie for yourself.  All of the posters I’ve seen for the movie convince me that absolutely nobody knew how to market it.  They’re all rubbish, and one in particular is so ridiculously off putting and misleading that it’s borderline offensive.  If there’s one thing this movie isn’t, it’s a straight movie about domestic abuse, even though that’s absolutely a plot thread.  Here’s that poster: 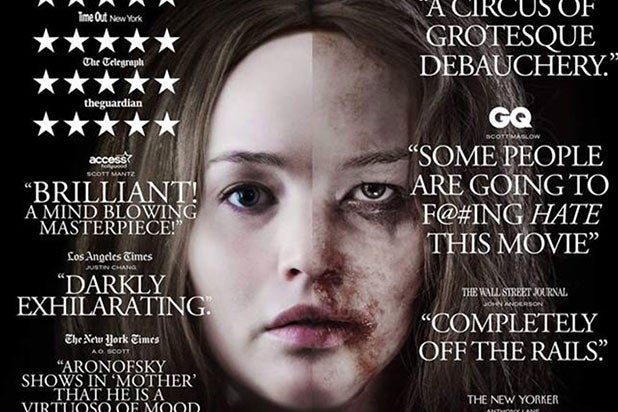 Some time after that, heading into the protracted Act 3, events in the movie come so hard and fast, and the movie transforms like very few movies I’ve ever seen.  It’s almost as big a shift as that in my own personal all time favourite movie, David Lynch’s masterpiece Mulholland Drive, and it takes a lot for me to say that.  Many people will find the final act to be utterly incomprehensible, and many will find the use of allegory too off putting or pretentious, but it’s clear to me that Aronofsky ( a movie maker I find very patchy) meant this movie as an experience, and I laud him for that.  As well as the nature of the movie, his decision to frame a massive percentage of Lawrence’s shots in full head close up was something I thought bold and it really paid off for me.

I tried to explain the movie to my wife, who didn’t attend the viewing with me, but I found it hard to translate the allegorical nature of it.  A straight summary of the plot does the movie a disservice, and defeats Aronofsky’s intent in making it.  And of course I have no idea if my take on it is even right.  If there’s one thing I can’t stand it’s critics of the film-school variety who shoehorn their own “interpretation” of movies, though in the case of Mother! (the exclamation point is emphasized in the opening title sequence, but for no apparent reason) it’s not only inevitable, but also a necessity.

All concerned do a very good job, though.  Lawrence in particular I thought was absolutely terrific throughout the movie.  Everyone else mostly pales in comparison to her, but Michelle Pfeiffer turns in her best performance in years, turning back the clock to the peak roles in her career.  Bardem’s character is more interesting than his actual performance, which might seem like a contradiction, and I didn’t really appreciate the old chestnut of older man with young, pretty wife – although it is perfectly in keeping with the context of the end’s kinda-sorta reveal.  Adding to the completely unexpected developments in Act 3, is the appearance of former SNL and Bridesmaids star, the glorious Kirsten Wiig (also, unfortunately, the Ghostbusters remake) in a role that’s slightly more than a cameo, and the magnetic turn of veteran actor Stephen McHattie, who provides Act 3 with its most intense character.  I enjoyed these actors both here.