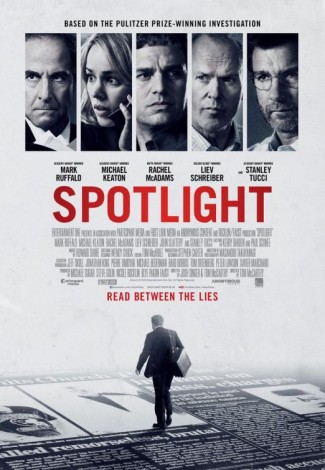 Spotlight, a movie about The Boston Globe’s investigative journalist department, won Academy Awards for Best Picture and Original Screenplay of 2015.  As well as that, it boasts a high pedigree cast comprising the resurgent Michael Keaton, Liev Schreiber, Mark Ruffalo, and Rachel McAdams, rounded out in supporting roles by Brian D’arcy James, John Slattery, Stanley Tucci, and Billy Crudup (Alien:Covenant).  If there’s one thing I enjoy seeing it’s an ensemble of name actors – for me, that probably goes back to watching All Star movies like The Great Escape and The Magnificent Seven, but I’m not alone.  I think most people probably get a kick out seeing movies like this, for whatever reason.  And Spotlight serves up an intelligent offering of adult entertainment that mostly pleased me.

For those of you who don’t know, Spotlight is the story of The Boston Globe’s investigation into the widespread child abuse committed by numerous Catholic priests in the Boston area, and how it was covered by the Boston Archdiocese, mostly through settling hush-hush deals with victims.  The months-long investigation, prompted by then-new editor Martin Baron (Schreiber), and temporarily placed on hiatus in the immediate aftermath of 9/11, yielded the ultimate prize in journalism, the Pulitzer, in 2003.  Today, the “pedophile priest” is simultaneously a cliché figure and a tragedy of epic proportion, and the work of the Spotlight team paved the way for the uncovering of child abuse on a global scale.  After the movie ends, but before the credit roll, there’s a staggering list of cities across the world where this vile epidemic has been revealed.  Child abuse is bad enough, but the fact that an organization such as the Catholic church actively hid the secret, indeed, allowed it to spread by reassigning pedophiles to other communities, is nothing short of monstrous.  I don’t have a religious bone in my body, and to me, these actions prove the evil of religion, and the terrible effect it has had on humanity.  But this is a movie review, not a soapbox, and I’ll quit it with the personal comments.

I watched Spotlight over two sittings.  I had just gotten back to my hotel room while visiting Miami at the weekend and could only get to the halfway point – not because I didn’t like it, but because I was fair cream-crackered (look it up).  I resumed the following evening from where I left off, and I don’t feel my viewing enjoyment or analysis was adversely affected.  Why bother telling you that?  Because while I enjoyed the movie just fine, I’m not convinced the screenplay was worthy of an Oscar.

Going back a little bit in time to 1976, All The President’s Men told a similar tale of intrepid journalism, here uncovering the labyrinthine conspiracy that came to be known as Watergate, setting the table for this kind of movie.  But where Alan J Pakula’s multi-Oscar winning movie was densely layered and dripping with menace (it lost Best Picture to Rocky, if you’re wondering), Spotlight feels a little lightweight dramatically.  Like All The President’s Men, Spotlight features a conspiracy that goes “all the way to the top”; a story that could fall apart until key figures perform last minute U turns and agree to go on the record; passionate reporters; level headed reporters; editors who stand to lose their reputations if the story turns out wrong, or is scooped by rivals.  It even features an organization so powerful that …  at least, that’s what we’re told throughout the movie.  The Catholic Church has such a tight hold on the Boston area that District Attorneys, cops, politicians are under its wide-reaching influence.  Yet at the same time, the story in Spotlight doesn’t show this kind of power.  In fact, it mostly seems effortless for the Spotlight team to get what they need to get.  The strongest conflict to be found in the movie is when Mark Ruffalo’s Michael Rezendez (the outspoken journalist) encounters a city clerk who won’t let him into the archives at the end of the work day.  At no point do you feel that the journalists are in any danger whatsoever – either to their lives or jobs.  As powerful as the Boston Diocese is supposed to be, it doesn’t appear to take any great steps to protect its dark, shameful secret.  But of course, it has to seem difficult, and Howard Shore’s brooding, urgent score gives the movie an air of danger that is just not present anywhere in Tom McCarthy and Josh Singer’s screenplay.  Perhaps the subject matter is enough, and that the team were never really in any kind of professional or personal danger, but the constant hyping of the church’s power ends up a stale plot thread, having no payoff.  The story is turned in, it gets published, and that’s it.  So why should I complain about this?  Because a movie is not a true story.  It might resemble true events, and even purport to tell a story of what actually happened, but that’s why documentaries are for.  Neither McCarthy or Singer worked for the Globe during this time, and they made stuff up for the sake of plot conveniences.  The scene where Sacha Pfeiffer (Rachel McAdams) gets a priest to casually admit he molested boys was tweaked – Pfeiffer didn’t interview the priest, another Globe reporter did.  The movie also exalts the work of the Spotlight team, despite other Globe reporters writing earlier stories, and presents a scene showing a characters shame at burying those earlier stories, when if fact The Globe’s editorial edict was a lot more active than just being too blind to see the potential importance of the stories  – they simply didn’t want to print any more stories about pedophile priests.

These are issues I had with the movie, and they’re small – to ignore them is bad reviewing, but to expound further would be petty.  Whether the events are mostly accurate or not doesn’t matter to me in the context of a movie, which needs to do its own job first and foremost.  And to be fair, Spotlight delivers a good, interesting, well acted, and mostly well written movie that never once failed to engage me, but it won the Oscar for best screenplay and I don’t completely agree with that award.

One thing I really liked in this movie was the cinematography.  Unlike Gordon Willis’s work in All The President’s Men, Masanobu Takayanagi (True Story) is less imposing on the story, allowing the events to play out with an economy of style – not exactly in the style of a documentarian, but the visuals are clear and undistracting.  This isn’t to say I don’t love Willis’s job in the former – I absolutely do – but Takayanagi gave me a strong sense of the city of Boston, which is, from a high level viewpoint, one the things the movie is actually about.

About ten minutes into Filth (written and directed by Jon S. Baird, from the novel by Irvine Welsh), I was on the verge of deciding that I hated it.  I knew exactly why I was feeling like this: I absolutely loathed the central character, played by James McAvoy (X-Men: Apocalypse), and I felt that the entire production was trying way too hard to capture the vibe of that other Irvine Welsh adaptation.  Even though I’d read the book about 14 or 15 years ago (Jesus,really?) and knew the major reveal, I went in not fully comprehending how much I could hate a fictional character.  And not only that, Bruce Robertson was being played by the faun from Narnia!

END_OF_DOCUMENT_TOKEN_TO_BE_REPLACED 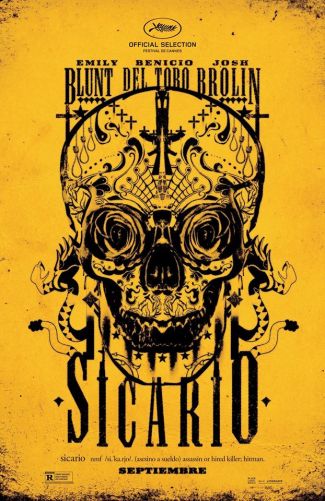 To be honest, I never had a lot of interest in seeing Sicario in its theatrical run, but I didn’t ignore the good press either. If I’d put two and two together earlier in the year that Denis Villeneuve was the director, I would have saw it theatrically, because his short resume contains really good work. I only know Taylor Sheridan’s name from acting gigs, so that wasn’t a draw for me. Turns out, he’s not a bad writer at all.

END_OF_DOCUMENT_TOKEN_TO_BE_REPLACED

Finally watched The Drop, based on a novel by Dennis Lehane, author of Mystic River (arguably Clint Eastwood’s best directorial effort). I’m a fan of seedy crime dramas, the kind that used to be so prevalent in the 70s, like Serpico, The French Connection, you know – where the story revolves around a handful of people and mostly takes place in a small geographical region, usually in the five boroughs of New York City. The Drop doesn’t deserve to be up there with the best, but it definitely fits into that sub-genre, and is a pretty good example of it. END_OF_DOCUMENT_TOKEN_TO_BE_REPLACED

Finally saw John Wick, starring Keanu Reeves, at the second go-round. I initially was excited by this, given the positive Keanu-is-back!! reviews, and the high rating on the old Tomatometer, and was disappointed to miss it on its first run. Having watched it last night, my initial interest was replaced by the deflated reality of the movie. END_OF_DOCUMENT_TOKEN_TO_BE_REPLACED