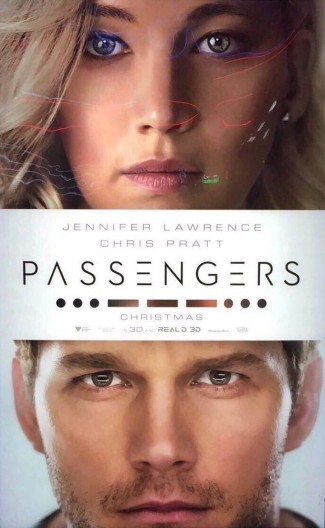 Chances are, if you went to see Passengers based on the previews alone, you’d have gone in expecting a sci-fi thriller with a solvable mystery at its core.  The movie, which stars fan favourites Jennifer Lawrence (The Hunger Games trilogy) and Chris Pratt (Guardians of the Galaxy and Jurassic World) certainly looks that way from the minute or so of carefully edited clips that you get.  The giant, somewhat dark looking spaceship in deep space, the two leads running around while things go to hell – and why are they the only two to wake up?!  So, yeah, if that was what you were expecting, I bet like me, you came out of the theater disappointed.

This was our Christmas Eve movie.  It was either that, Rogue One: A Star Wars Story, or Nocturnal Animals.  The dice rolled, the straw drawn, the wheel spun, and Passengers was it.  And it’s a huge mess of a movie.  It becomes clear early on – maybe the beginning of Act 2 – that the previews are a bait and switch.  Passengers is actually a chick flick in space.  It’s only as adventurous as the confines of that genre will allow, only as smart as it needs to be in order to service a poorly written romantic drama, and I was pretty annoyed by that.  Now don’t get me wrong – I’ve enjoyed romantic movies in the past (Love Actually and You’ve Got Mail are brilliant, I think), but it’s not a genre that I’ll automatically spend money or time on.  Sci Fi Adventure – well, that’s another story!  So when I realized about half way through I was kinda watching a lame version of Titanic in space, I was peeved.  Pratt is flying steerage, with the absolute cheapest package – Lawrence is wealthy, and gets full breakfast.

I supposed I could have handled it well enough if the movie itself had actually been good, but the trouble is, it isn’t good at all.  Written by Jon Spaihts (Prometheus original script, Dr. Strange original script), the movie suffers in mostly all major areas.  At the start, it takes a long time (in cinematic terms) to establish the human story.  Spaihts spends at least five minutes on the ship Avalon ramming (in icebreaker-like fashion) through a field of space rock before finally encountering a gigantic rock (giant iceberg analogy, to further the Titanic comparison), as well as some expository text about the background of the story.  I can understand why this happens early, but how it happens is just bad screenwriting.  And “bad screenwriting” is pretty much par for the course here.  From the many examples present, here’s another early one: Michael Sheen’s robotic bartender, whom you’ve seen in the trailers.  Not long after Pratt is awoken, he roams the ship and finds the bartender already at work cleaning glasses.  There’s no indication that Pratt’s impromptu awakening has activated him, so the idea that resources would be used like this is ridiculous.  Here, Spaihts fumbles an obvious opportunity to empower Pratt.  Pratt is an engineer – capable to the point of being a Mary Sue, as it turns out – so why not let him stumble upon the inactivated robot, then find a way to activate him?  The movie is littered with this kind of bad writing, some of it insulting to the viewer.

Laurence Fishburn’s appearance, surely an homage to Event Horizon, is one such insult.  He’s simply this movie’s version of Basil Exposition (from the Austin Powers series).  Where Pratt’s awakening is accidental, and Lawrence’s isn’t, Fishburn’s appearance is horrendously contrived.  It’s maybe one of the worst guest-starring roles I’ve ever seen, and while I can’t stand people who casually throw out words like “racist”, and I’d never accuse Spaihts of this, it’s beyond awkward to me that Fishburn’s character (a decorated officer, clearly intelligent), in one scene can only look confused and utter the word, “Damn.” As if, y’know, that’s all a black male can come up with when faced with a complex situation.  Not funny, and another example of Spaihts’ lack of real writing talent.

By the time Fishburn arrived, I had checked out of the movie, but when his appearance concludes, I became annoyed at the direction of the movie.  Any kind of intelligent questions you may be asking up to the end of Act 2, like “Why was Pratt awoken?”  “Is there some hidden agenda behind the interstellar trip?” – no, they’re literally all invalid.  What you see is what you get.  Almost no attempt to create depth of any sort here.  I’ve subsequently read some typical #outrage comments regarding the movie’s central “moral issue”, but I had no problem with it at all.  At best, it presents the kind of dilemma anyone would face in that situation, and likely respond in the same manner – at worst it simply facilitates the inevitable “breakup scene” that all poorly written romantic dramas have.  But it’s nothing to get one’s knickers in a twist about.  Save your ire for simplistic, overall badly written movies like Passengers.

I often wonder what makes people star in movies with a script this bad.  Passengers isn’t the first crap screenplay to attract Pratt and Lawrence-level talent, nor will it be the last.  I can only imagine they liked the idea of working together, despite the script – then again, why assume that either of them care, now that they can command $10M+ per picture.  Just another paycheque job that requires nothing much of them, but I do wonder if the mediocre reviews will make them more selective about future gigs.

Spaihts was recently described as a “go to guy for space thrillers” and his script for Passengers appeared on the 2007 Black List – so it’s likely that his level of incompetence will be around for quite some time.

ROGUE ONE: A STAR WARS STORY