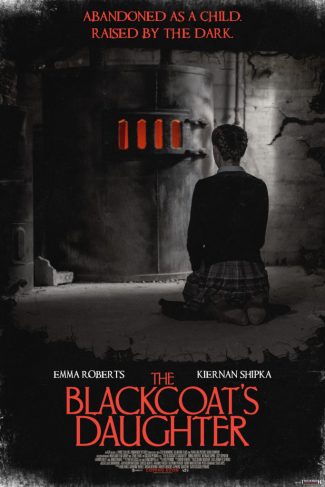 Osgood (Oz) Perkins is a new name on the scene, but not an unfamiliar one.  He’s the son of Psycho star Anthony Perkins, so it’s fair to say that unlike other first time moviemakers a lifelong connection to the movie business ingrained within him some valuable moviemaking tips.  It shows here in his first movie, which is a taut, suspenseful indie horror, starring Emma Roberts (American Horror Story), with fine supporting work by Lucy Boynton and, in particular, Kiernan Shipka.  It’s well directed for sure, but the story itself depends on one particular conceit that doesn’t work,  It’s a giant black hole and for me, the entire movie collapsed into it.

As in Harry Potter and the Sorcerer’s Stone, the story features the main protagonists forced to stay in their boarding school over the winter break when their parents are not able to pick them up.  But where ‘Arry’s situation was mostly of the warm and cosy variety, this one is bleak and foreboding.  Kat (Shipka) is the younger girl, oddly remote and full of a secret, mocking sense of humour – in contrast to Rose (Boynton), who is one of the cool students in this Catholic all-girls institution.  It’s not immediately known why Kat’s parents have not shown up, but Rose has delayed her own parents’ trip: she thinks she’s pregnant, and wants to talk it out with her boyfriend first.  When everyone leaves at the end of the semester, Kat and Rose are the only students left, watched over by the two resident nun/caretakers.

This is the setup, and it’s good.  I really felt the atmosphere in the first act, and while some think the pacing is glacial (it IS very slow), I didn’t feel it was ponderous.  I liked the stark contrast between both girls, both physically and in character, and both their arcs started off differently too, which is good writing.  Both actresses hold their own against each other, and I enjoyed them both.  What works against Act 1 was the location.  No doubt the product of a low budget, the remote feeling of the location is almost undone by the exterior shots that place the school firmly in a pretty standard and un-remote residential neighbourhood.  It was always in the back of my mind that help, if any was needed, was a simple phone call or two minute walk away.

A little into Act 2, the movie introduces us to Joan (Roberts), a skittish blonde, who appears to have quickly left a hospital of some kind in a hurry, and still has the bracelet.  Joan, as you soon find out, has a history that tells you why she’s running away, told in brief flashbacks, and she quickly adds to the mix of interesting female characters.  When she’s picked up at a bus station – innocently enough – by a middle aged couple, played by James Remar (Dexter) and Lauren Holly (NCIS).  In these scenes, I suspected tragedy was afoot, and I wasn’t wrong, thought how I thought it would go down was a lot different to what I’d suspected.

Now, it’s here that the black hole I mentioned rears above the horizon, and I’ll explain why by giving a mostly obscure reference.  Ready to indulge me?  Back in the 80s, I was a big fan of John Byrne, legendary X-Men, Superman, Fantastic Four writer/artist (to name but a few).  He briefly worked on The Incredible Hulk, and his first issue contained the kind of cheat that bugged me watching the reveal of The Blackcoat’s Daughter.  In issue #314, Byrne introduces a couple in a brief scene: “Ramon” and an unnamed woman.  It’s meant to be an intriguing subplot – who are these people?  In actual fact, while Ramon had never been seen before, the woman had.  It was none other than Betty Ross, long-time suffering girlfriend of the Hulk’s alter ego Bruce Banner.  Yet in this appearance, she was a mystery woman – only because Byrne’s version of Betty Ross looked nothing like any other artist’s depiction.  It was an easy cheat, due to the difference in art styles, but an unforgivable one from my point of view because it was Byrne hoodwinking the readers to tell a story.

The Blackcoat’s Daughter essentially has the same cheat, and maybe it’ll jump out and bug you the way it did me, or maybe you just won’t care.  I cared, and it cast a wide shadow over the rest of the movie for me. Which is too bad, because not only are the performances strong, but the story is pretty good too – at least the broad plot points.  The violence that comes out of nowhere in the second half of the movie has a transformative effect on the movie too, leading to a very welcome, and subtly introduced, supernatural influence.

It’s in the third act where Shipka outsrips the other actors in the production – the part of Kat is given a lot of meat, and she devours the material with what’s clearly some good direction from Perkins.  Despite the central conceit that doesn’t work for me, just about everything else did in the second half, with the lowest point coming during a scene with a priest.  To tell you what happens would give away the core of the plot, so I won’t bother.  It’s not a bad scene, but it’s one of the few in the movie that feels like a cheap indie, out of place among the other good stuff surrounding it.

There’s a lot to impress in Perkins’ first movie – he feels like a naturally gifted director, and in that respect I’m reminded a little of Nicolas Pesce’s impressive debut The Eyes Of My Mother.  Well worth watching, though the pacing may grind some down.