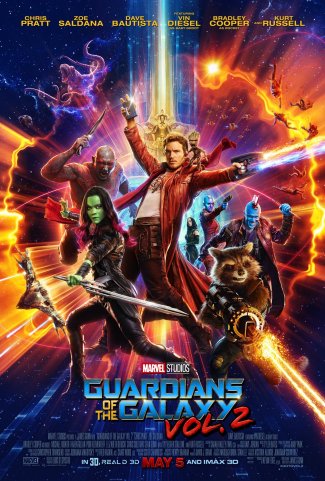 As soon as Kurt Russell was introduced as Ego, in Guardians Of The Galaxy, Vol. 2, one specific thought came to – how was he going to die?  Now, to anyone who reads comics, especially those who remember when comics were a good, fun read, it’s no spoiler to say that Ego, The Living Planet is historically one of Marvel’s cosmic villains.  First introduced on the final page of the September 1966 issue (#132) of The Mighty Thor, Ego is defeated in the following issue and vows to never attack anyone else … of course, over the decades, Ego has returned again and again to threaten lots of places and superheroes.  But the specific story I immediately thought of was Fantastic Four #235, a few issues into John Byrne’s legendary run as writer and artist.  And, as it turns out, I was right on the money.  So what does this have to do with the review?  I’ll get to it a little later.

Vol.2  is the sequel to the successful Marvel splinter franchise, Guardians of the Galaxy, which ultimately had a global box office take of $773 million in 2014.  If opening weekend is anything to go by, Vol.2 is set to haul in close to $1 billion worldwide.  After 3 days, the sequel is currently outpacing the original by an astonishing $50 million, domestically.  It’s proof, if any was needed, that the Marvel Studios powerhouse is unlikely to run out of steam any time soon.  But is it any good?  In my opinion, it’s better than the original.

Back in 2014, I didn’t have a lot of experience with that incarnation of the team from the comics – my only real exposure was their appearance in a story arc in The Defenders, in the mid 70s.  The roster was completely different.  Over the years, a new team was assembled, that came to include characters that appeared in other books, notably Star Lord, whose second appearance in the Marvel universe was chronicled by Chris Claremont and John Byrne, who went on to create a legendary, defining run on the X-Men.  Some people might be bothered by the vast differences in the characters from the comics to the movies, but not me.  Since Marvel has always used alternative reality versions of their characters, I simply think of the movies as just another one of those.

What stands this franchise out from Marvel’s core Avengers franchise is the lack of connection Guardians has to everything else.  In their first two movies, there’s no mention of any of the other characters in the other movies, other than Thanos, the cosmic villain who is father to Gamora (Zoe Saldana, Star Trek Beyond)and Nebula – this will change next year, when the Infinity Stone subplot that connects both franchises will see the Guardians team up with The Avengers to defeat Thanos, first introduced in the post credit scene of the first Avengers movie.  Whew, that’s a real infodump, but it’s hard to write a review of Vol. 2 without giving some valuable backstory.  If you’ve stuck with me so far, thanks! 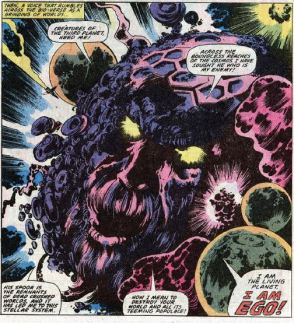 In the sequel, Peter (Star Lord) Quill (Chris Pratt, Passengers)finally meets his father, played here by fan favourite genre star Kurt Russell, after an extended sequence that sees The Guardians fleeing a race of genetically superior, golden skinned assholes (the golden skin will set some long time comics readers’ Spidey senses ringing – it did mine) after Rocket steals something valuable of theirs. After escaping through a portal to a habitable planet, they are followed by Ego and his companion Mantis, and from there to Ego’s own planet, where he gives Quill the rundown on who he really is, and what Quill’s potential true place in the cosmos can be.  Of course, the golden assholes are not to be defeated, and so they, and The Ravagers, form a shaky alliance to destroy the Guardians.  It’s a hugely plot-driven, high action feature, as you’d expect from a Marvel movie … but unlike most of the Marvel movies, Guardians vol. 2 has a real character-driven heart to go alongside everything else.  As well as that, this is a funny movie that doesn’t compromise the plot with stupid set pieces.

The original movie was good, I thought, but not great, and many times I thought the humour felt forced.  It’s to the movie’s benefit that James Gunn returns as writer/director, because with the first movie having done its job in introducing the characters, the humour this time around feels a lot more organic.  By now we know the characters, so when Drax opens his big mouth to say something brutally honest, it feels a lot funnier in the sequel.  I laughed out loud throughout the movie – that’s something I don’t look for in movies, so it was quite a surprise for me that I enjoyed this aspect of the movie as much as I did.

The action scenes are well done, but nothing special, but the movie comes alive visually throughout.  I really enjoyed the vivid colour palette used, and at no time does the movie feel overdone or rushed in that department.  Ego’s planet doesn’t much resemble Jack Kirby’s original design from the 60s, and while the design seems overly fussy at times, it shows enough contrast with the earlier scenes in the movie to keep homogenization from being a problem.  In terms of the characters, I liked the depth given to both Yondu (Michael Rooker) and Rocket (voiced by Bradley Cooper), especially during a shared scene towards the end of Act 2, and there’s also a nicely reconciliatory scene between sisters Gamora and Nebula.  I mean, sure, depth in a superhero movie can sound like an oxymoron, but any attempt to give more life to characters in this kind of movie is something that should be appreciated – I thought Gunn’s approach to this movie provided a good balance between what doesn’t matter (special effects) and what does matter (characters).

As an aside to my “special effects don’t matter” comment, it’s something I strongly believe, but I will add here that the Missouri, 1980 scene that opens the movie features another example of digitally de-aging an actor.  Marvel Studios has done this three times now (by my current recollection): RDJ in Age of Ultron, Michael Douglas in Ant Man, and Kurt Russell here in Guardians vol. 2.   Each time, it seems like the technique gets better – I was so stunned by the effect here that I actually had to turn around to say so to my wife, and I rarely ever talk during a movie.

But I’m a comic book nerd at the end of the day, and Guardians vol.2 appealed to me for other reasons – Gunn throws in a LOT of references and easter eggs that I absolutely loved: The Watchers, The Celestials (Ego’s plan is borrowed from a 1999 Marvel miniseries, Earth X), and one character not actually seen, but the reference in one of the many scenes that punctuate the ending credits was another that made me exclaim out loud.

Getting back to the fate of Ego, and its tie to Fantastic Four #235, I’ll say that unless my eyes failed me, the name of John Byrne is not thanked in the end credit roll, which peeved me to no end.  Byrne is a polarizing figure in comics, and nearing 70, has been past his prime for many years now, but goddammit, the first half of his run on the FF contains some of my all time favourite stories, and given that Gunn’s denouement relies heavily on Byrne’s work, a thank you would have been appropriate.

Having said all that, it would be a petty thing to end the review on, so I’ll say, I really enjoyed this movie.