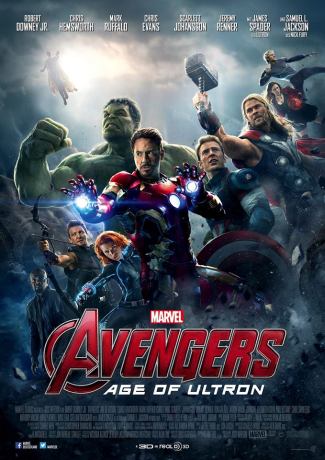 Opening weekend, Avengers: Age of Ultron. The theater was predictably packed, but me and my two fellow movie patrons got decent seats so my judgement of the movie wasn’t prejudiced by a shitty viewing experience.

Okay, so how was it? As I write, the movie is sitting at over $600M global box office, but is that ever a real judge of quality? In most cases, never. I’ll be completely honest, I didn’t love it it, never came close.

It IS entertaining, but throughout the movie I didn’t really feel engaged. It’s kind of like how I felt once Act 3 of the first Avengers movie came around and Whedon went full videogame mode, jettisoning story in favour of what became a fairly routine fly-and-shoot finale. To me that’s a lazy way to end a movie. It’s like when you don’t have anything to add, or when you run out of ideas, you just throw wave upon wave of faceless identical bad guys at our heroes. And unfortunately, Whedon does it again in Age of Ultron. In the first movie, it was flying sled riding extra-dimensional aliens, here, it’s just even more generic flying robots. I was disappointed that Whedon went in this direction.

But I was mostly disappointed overall. The movie has some charm, it has some nice little character moments, but the little moments seem perfunctory, as if Whedon was looking at a playbook and deciding to drop in a downtime scene here and there, in between action-oriented moments, (of which there are many). The rest of the story is a real hodgepodge of set pieces, none of which really add up to a solid movie for me. The Hulk v Iron Man “Hulkbuster” suit was the best of them, but it felt REALLY tacked on, like Whedon felt there needed to be a Hulk v Iron Man fight and contrived a plot around it. The origin of Ultron is laughably bad, I think. If you saw the muddled mess of the climactic “battle” of Ang Lee’s mostly-wretched Hulk movie, you’ll be dismayed. Even Ultron himself is unengaging. The CGI is uninteresting, and again, the writing by Whedon is poor. What Ultron is, is simply James Spader the way he is in The Blacklist, all quips and hinted menace, but lacking real substance. When revealed, his master plan made my head spin – “What? That’s IT?” It’s extremely weak.

What saves the movie from being a lackluster, generic affair is the humour, of which there is – like the action scenes – a lot. And I know some hardcore comic readers might get turned off by it, but I enjoyed most of it. Thor comes off as having the most comedic role, and I liked that. I’ll go and see it one more time with the wife, whose own viewing experience in Iowa wasn’t so great, but it’ll only make me enjoy it less. For the first time around, it only registers 3.0/5.0 on the Hope-o-Meter. One more thing – to confirm, there is NO post credits sequence (we stayed until the credits rolled), and the small sequence within the end credits is crap.