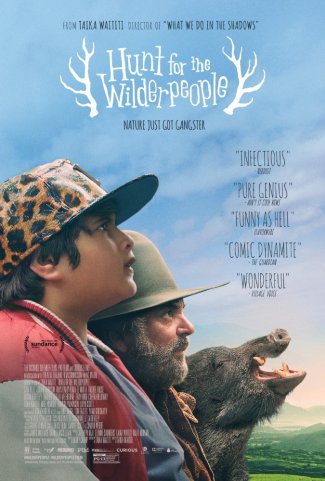 I had a fairly good idea what to expect from The Hunt For The Wilderpeople, Taika Waititi’s follow up to the fantastic vampire horror comedy What We Do In The Shadows, but I’d be lying if I said I was right.  I only knew that it was a bonding story; set in rural New Zealand, a troubled kid is sent to live with foster parents.  It’s his last chance before getting cast into the system as a juvenile delinquent, but then he bonds with those people and all is well.  Seen it before, right?  Seems like it’s something that would be on Hallmark or The Family Channel – a feel good, Disneyfied slice of Midwest apple pie.  That’s what it sounded like to me from my ignorant lack of knowledge about it, anyway!

I mostly watched this because of What We Do In The Shadows, to try and gauge if Waititi was a one-hit wonder as I wait for his Marvel Studios debut later this year with Thor: Ragnarok.  I also watched it at this particular time as a kind of counterpoint to Captain Fantastic, a movie I watched a couple of days ago with mild thematic similarities, to see if I could get any more out of it.  As it turns out, I had no idea what Wilderpeople’s story actually was.  And that’s good, because it was a pretty unexpected treat.

That plot I described above – that’s essentially just the setup.  A chunky kid, sullen and quiet, goes to live with two foster parents.  Big hearted Bella (Rima Te Wiata) and curmudgeonly Hec (Sam Neill), live in a remote shanty on the outskirts of a verdant forest and mostly live off the land.  When Ricky (Julian Dennison) is dropped off to them by social services, it’s exactly the kind of movie you’d expect, but early on, it changes quickly.  Ricky isn’t your typical movie juvenile delinquent, he’s actually just a sweet kid turned over to the system at an early age by his mother.  While he talks big about rapping and name drops Tupac, it’s with the naivety of a kid who’s just a kid.  Dennison is a disarming presence in the movie, in a year of great child performances (the kids of Stranger Things, Sennia Nanua in The Girl With All The Gifts), he’s really entertaining.  The movie is billed as a comedy, and it mostly is – and the kid is the main reason why.  Waititi gives him great lines and probably is the one responsible for the timing, but the delivery is all Dennison’s, and it’s really joyful to watch.

What the movie doesn’t have that the Disney special version does is a strong transformation arc, at least with Ricky.  He doesn’t come into the movie damaged by the system, and when the movie ends, he hasn’t miraculously changed and matured and found within himself a new outlook, but I felt that the story would have suffered if he had.  Ricky, like I said, is just a sweet kid throughout and it will be enough for most people – it was definitely enough for me.  Hec’s arc is the one that transforms, and yeah it’s predictable, but also satisfying.  Hec isn’t played as so stand offish and cantankerous from the start that there’s no affection for the boy whatsoever early on, so that when both start to form that bond, it feels like a natural growth, not a plot contrivance.  I really liked the speed Waititi (who also wrote the script, adapted from the novel Wild Pork and Watercress, by Barry Crump) set for the movie.  It never feels ponderous or rushed, and none of the story seems forced or overtly sentimental when it could easily be in someone else’s hands.

The bulk of the story – the “Hunt” of the title – concerns Ricky and Hec being mistaken for kidnappee and kidnapper when Ricky wanders into the forest and Hec goes looking for him, but then they gain notoriety in the New Zealand press when they cannot be found, popping up now and then to tangle with a trio of hunters and aid a sick ranger.  There’s a funny scene where Ricky is taken to the home of a father and daughter (or they could be brother and sister, I’m not entirely sure) and they already know who he is from watching the news, and it’s a scene that’s indicative of the gently funny mood of the entire movie.

Sam Neill plays a part quite unlike anything I’ve ever seen him in before.  Hec is grizzled and distant, but there’s a sense from Neill’s performance that remoteness is an artifice, a wall he keeps up between himself and everyone but Bella.  There’s a touching scene heading towards the end of Act 1 where that wall comes down, and even though Hec throws it back up soon after, he’s been sussed out by us.  He’s a man who has never had a lot of love in his life, but not because he never wanted it.  I felt a sadness in Neill’s performance that brought an implicit depth to the character of Hec, and it was nice to watch.

Unlike Captain Fantastic, this is not an intense movie about the bond between family.  There are no overly dramatic scenes where you feel that bond could be severed irreparably, but it’s not that kind of movie.  It’s a small, funny, touching movie about two kindred spirits who bring out the best in each other as they share the experience of a lifetime.  You get the sense that having gone through this adventure together that something unbreakable has joined them, and that the end of the movie is actually just the beginning of the rest of their story.

WHAT WE DO IN THE SHADOWS

THE GIRL WITH ALL THE GIFTS

3 thoughts on “Movie Review: THE HUNT FOR THE WILDERPEOPLE – a sweet, good natured movie about two kindred souls who share the adventure of a lifetime.”