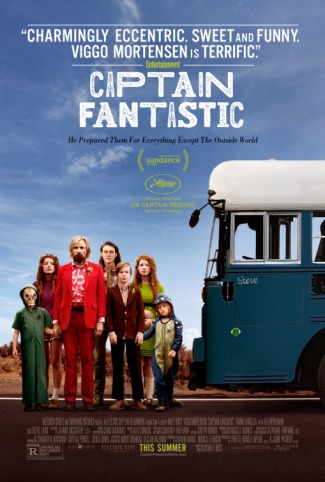 There’s a scene in Captain Fantastic towards the midpoint of the movie where Ben Cash (Viggo Mortenson) asks his daughter to explain what the book she’s reading is about.  The book is Nabokov’s Lolita, and when she begins, he cuts her off.  “That’s the plot,” he says, which forces her to go into greater depth in her explanation.  Why am I starting out with this?  Because this is a movie that is a great example of plot versus story.  It’s not unfair to look at every blockbuster over the last few decades and say that they’re not actually about anything.  You can daisy-chain their plot points together and they tell a rudimentary “this happened, then this happened” etc, but the stories themselves lack dimension.  Great movie stories are “about” something more than just what’s happening visually.  The best screen stories are those that can be about multiple topics revolving around a central hub.  This is what I felt while watching Matt Ross’s luminous movie.

In terms of plot, Captain Fantastic is about an unconventional family, headed by Ben, who travel south from their Washington state wilderness home for the funeral of Leslie Cash, the wife and mother who took her own life while battling bipolar disorder.  On the way, they encounter various people and situations that put their faith in each other to the test, including Ben’s sister, living a conventional middle class life, and Leslie’s parents, both of whom share great concerns over how Ben is raising his children.

Here’s where one layer of the movie struck me.  Politically, I’m strictly middle of the road.  I don’t care for the extreme biases of the left or right, because for me, the actual, intellectually honest truth is in the middle.  So when I see extreme positions espoused by people in news bits, I summarily dismiss them as one-sided bullshit, and while I don’t have a particular disdain for people who want to “live off the grid”, I tend to regard them with some skepticism.  But I also know myself, and know that my attitude comes from being comfortable with the life I have.  I like my car, my phone, my computer, my game systems, my friends …. I just can’t conceive of living apart from all of that.  In Captain Fantastic, the Cash family live in the lush forest surroundings of the Pacific Northwest.  The place is majestically beautiful, as shown in the opening flyover shot, and when we see the Cash family it’s clear that a “cabin in the woods” life doesn’t have to be that of the paranoid, Government hating white redneck.  Ben is raising his family to be self-sufficient and philosophical in a rejection of the phony materialism in the rest of the world.  He is a brilliant mind, and his children haven’t fallen far from the tree.  And they’re free, you see.

They catch and grow what they eat, they make items that are sold by a store in the nearest town … but there’s something missing.  It’s most evident in the two oldest sons – explicitly in the younger of the two, more subtle in the oldest.  Before they make the journey south, they seem to live a fairly harmonious existence, but you begin to see the depth as early as act one when Ben leads the children up a sheer cliff face.  Ben isn’t just a Portlandia hippie, he’s enforcing his own extreme views on his children, and these include survivalism and self-sufficiency above all else.  The Cash family would never see themselves as a cult, but as the joke goes, that’s exactly what a cultist would say.  Everything the children don’t see is seen and noticed by those who observe them.  My only disappointment with the movie was that I didn’t get a clear sense of why this life and philosophy drove Ben to such extremism.  Living off the grid I can understand, but why make kids as young as 8 climb a mountain?

And yet, Matt Ross’s brilliant, affecting screenplay won’t allow us to condemn Ben.  Is there anyone in the Western world who doesn’t feel enslaved to our materialistic, convenient lives?  How many of us fantasize about what we’d do with a giant lottery win that would free us from the yoke of our bosses and debt? Well, the Cash family didn’t need $100 million, they simply operate with the philosophy of rejecting materialism from the get go.

Likewise, I can’t outright argue with Ben’s determination that he knows the best way to raise his own children, especially in a country where the noble goal of teaching is often subverted by political subtext.  When my own daughter was a child, I actively made it a point to supplement her school lessons with after school homework that I led.  My wife and I made it a point of her childhood to instill within her the importance of critical thinking, something that is lacking in many people these days, especially children.  What is the most important thing you can give your child?  Stuff?  The latest smartphone?  The $150 shoes?  Your own personal hatred of how things are, whether you’re on the Left or Right?  No, it’s none of that.  It’s the ability to see the world in all its slants and biases with as critical an eye as possible, not to simply drink it all in and let is pass through undigested.

Captain Fantastic is a story about that noble goal, but not just about that.  Viggo Mortenson’s performance as Ben is being hailed everywhere.  He is the soul of the movie, the heart of it, and it’s a breathtakingly beautiful, nuanced performance of a deeply, multilayered character as written by Ross.  Ben is brilliant, arrogant, and uncompromisingly blunt … but at the same time, he harbours a deep, pure love for his children that brings out moments of tenderness and kindness in such a way that maybe only Mortenson could have played this part.  There are few actors on the planet who can convey such broadness of character by his eyes alone than he can.  I freely admit I’ve been a huge fan since even before the Lord of the Rings, and I’ve come to see him as an actor whose abilities transcend the craft.  It isn’t just The Method either – I feel that there’s an authenticity, and genuineness that goes beyond technique, and its never so apparent as it is here in Captain Fantastic.

The end of the movie is also the end of Ben’s way of life, but it’s a transition that comes from a beautifully developed character arc, made all the much sweeter from the surprising coda that comes just before when the Cash family’s life to this point reaches their pinnacle together.

I’ve used the word “beautiful” twice already, and it’s not overused at all.  This is one of the most heartfelt family movies I’ve seen – not just because of Mortenson, but he is a big part of that description.  It might be too blunt for some people – the very people that the movie itself rejects as being entrenched in their own biased comfort zone – but I watched it with a kind of longing that I’m just too much like those other people to ever be someone like Ben.