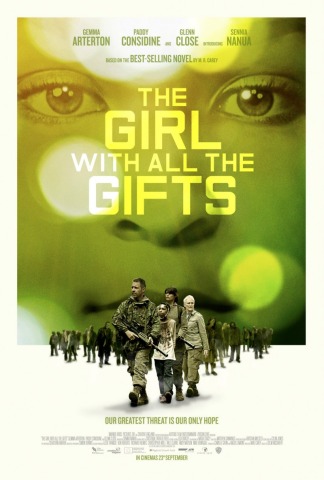 I took a pass on watching this a few weeks ago when the word “zombie” jumped out in the materials, because I’m mostly sick of the zombie sub-genre of horror.  Not that there can’t be good movies about zombies, but c’mon – enough already.  Having said that, I remain a faithful watcher of The Walking Dead, and I recently watched the South Korean zombie movie Train To Busan and found it to be okay.  I won’t regurgitate my feelings about zombie media here – if you’re curious, my Train To Busan review contains them.  So yeah, The Girl With All The Gifts just kind of faded away, subsumed into the background noise of zombie movies that annoy the hell out of me.  But then, it was recommended to me by a friend whose opinions I trust.  Suddenly it was back on the list!

What attracted me back to the movie was that he said it tried to do something different with the sub-genre, and that was actually one of my main complaints about Busan.  It was “zombies on a train” and didn’t really try to be anything else.  Right off the bat, The Girl With All The Gifts goes for something different, and I have to say – not only was I hooked from the get-go, but the first 20 minutes or so is one of the most intriguing openings I’ve ever seen in a horror movie.  Now, I might have felt different about it had I went in not knowing it was a zombie movie, but no point speculating about that alternative.  There are two reasons why the opening is so good – the first being that the script doesn’t take its time world building.  All would-be screenwriters take note – you know when you’ve scoffed at the old chestnut “start in media res”?  THIS movie is close to a perfect example of that.  You don’t need to open with a bang like this, but the active principle is clear and unmuddied here.  I’ve read so many screenplays over the years, and so many fall at this first hurdle.  Adapted from his own novel, M.R Carey gets the viewer into the movie instantly, but also in a non-hurried manner.  He doesn’t open with an action scene, he opens with intrigue, and that intrigue lasts until close to half an hour in – it’s long for a first act, but it doesn’t feel like it.  The second reason Act 1 is so good is because the movie has unearthed an absolutely terrific talent, in Sennia Nanua, who plays Melanie, the young protagonist of the movie.  How good is this kid?  Well, you probably loved Millie Bobbie Brown in Stranger Things, right?  Sennia Nanua blows her out of the water, and that is no understatement.  I’m not anywhere close to being jaded, but it takes a lot to impress me – Nanua impressed me from the start, and didn’t let up.  Is she that good?  Watch the movie.  Her performance deserves an audience.

The action settles down a little at the beginning of Act 2, and I prepared myself for the inevitable air rushing out of the balloon with a weak second act.  There’s no question that the first act would have been hard for many good writers to follow, and you can feel in that period up to the midpoint that there’s a more relaxed pacing, allowing the characters (and by extension, the audience) the time to get to know each other better.  It’s not a misstep as such by Carey, but much of this time takes on a more expository feel than anything else, and any time your characters go into exploration mode, the pacing drops like a lead balloon.  The supporting cast here is strong, and all deliver solid performances, which carries the story over this hump.  Of these secondary characters, the main one is Helen Justineau, played by Gemma Arterton (The Voices, Byzantium), the others are Eddie Parks (Paddy Considine), who is allowed the luxury of a satisfying transformation arc, and rounded out by Glenn Close (surprised to see her in a movie like this, but she plays her role as relatively 2-dimensional scientist Dr. Caldwell straight).  I don’t want to even hint that there’s anything particularly bad about this part, because that is absolutely not the case, but it isn’t helped by the visuals.  Being as this is a British movie, the budget didn’t extend too far into post.  The digital renderings of the environment are not bad, but they look like PS3 cut scenes.  When the movie shows us the first panoramic view of post-apocalyptic London, it looks cheap and unconvincing, which is a shame.  But really, that is about as bad as the movie gets, which is not bad at all.  Sticking with the PS3 theme, as the movie progressed past this, towards the midpoint, it struck me that both the visuals AND the emerging storyline reminded me (more than a little) of the acclaimed The Last Of Us.  If you watch, I’d be surprised if you didn’t feel the same – assuming you’ve played the game, of course.

My fears about the movie running out of steam after that opening are completely unfounded, though.  The movie then introduces a new role for Melanie, and a completely unexpected twist in the story that leads to a terrific Act 3 plot development that isn’t so much of a twist, but rather a further strengthening of Melanie’s role.  It’s terrific – both sad and vibrant at the same time.  It’s also telegraphed a wee bit by a story told by Justineau in Act 1, but again, not a criticism here by any means.

Where the movie sags a little is in the scenes of zombie action – mercifully there isn’t many of them, because the developing story doesn’t need them to be important.  Ultimately, it really ISN’T a typical zombie movie after all.  In fact, as the story moves towards its climax, what unfolds is more sci-fi than horror, echoing such sci fi classics as John Wyndham’s The Day of The Triffids, Theodore Sturgeon’s The Dreaming Jewels and More Than Human, and Richard Matheson’s I Am Legend.

As good as the movie is, Nanua’s performance towers high above it.  I would be amazed if she doesn’t kick on from this quickly.  It’s been a long time since I’ve been this taken with a young actor’s performance, but don’t take my word for it – watch the movie for yourself.