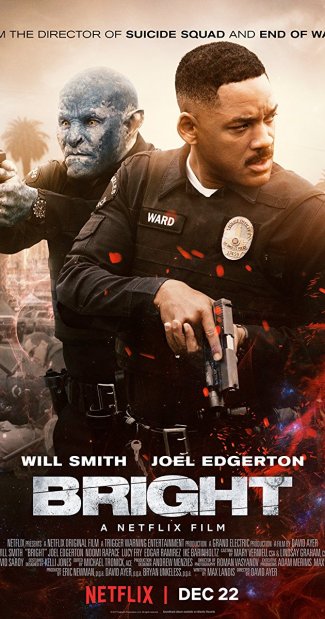 I’m not a fan of Will Smith, and yeah, it’s partly because of his role as the Fresh Prince of Bel Air, but mostly because he starred in two cinematic travesties that, inexplicably, have a fan base: I, Robot, and I Am Legend.  In both cases, these movies were adaptations of capital L Legendary works of genre fiction and were spectacularly awful in their execution.  I was never a huge fan of Asimov’s ponderous prose, but Richard Matheson’s seminal vampire novel remains a great favourite of mine.  Fresh Prince and the Zombie Vampires was the worst of the three adaptations – maybe someone will eventually do it right.

But it isn’t like I’ve hated everything he does – Six Degrees of Separation and Hancock were both really good, and he was good in them, but then he also makes movies like Collateral Beauty – the plot alone to me is like garlic to a vampire.  So yeah, not a fan.  The last movie of his I watched was 2016’s deeply awful Suicide Squad, though I concede that Smith’s role wasn’t the worst thing about it, so you might think it odd that I would choose to spend a couple of hours on the Netflix original movie, Bright.  The main reason I watched it: Max Landis, based on how much I love Chronicle, a movie that’s still the best movie about super powers even 5 years later.

So, what is Bright?  It’s basically the world of Grimm, set in South Central LA. In an alternate universe, the world we know has developed along parallel lines, with the inclusion of beings we consider fictitious and mythological.  Will Smith plays Daryl Ward, an LA cop forced to ride along with an Orc partner – the first in his division, thanks to a mandated diversity experiment.  Nobody likes the Orc named Nick Jakoby, played well by Joel Edgerton (The Gift, It Comes At Night), utterly unrecognizable under the makeup.  Early on you feel Nick is a bit naive and clueless, but it soon becomes clear that he spends his entire working life walking on eggshells so that he doesn’t further enrage both sides that hate him: the cops themselves, and the Orc community.  If you think this allegory is a bit heavy handed, you’re right, and in the context of the story already feels a bit late.  Nick is literally the only Orc cop in the entire LA metropolitan region in 2017?  The movie didn’t lose me this early on, but it’s the laziest of jumping off points for this kind of story, which falls squarely in the hoary old “buddy cop” genre – you know the familiar arc well enough by now.  Two cops that dislike/mistrust each other are forced to work together, and develop a mutual understanding and respect for each other during the course of the movie.  Not that cliches never work, though – and I actually did like Smith and Edgerton’s chemistry together.  If not for them the movie would have been a chore to watch.

Suicide Squad notwithstanding, David Ayer has plowed similar ground before, in 2001’s Training Day, and  2012’s End of Watch – two LA cops in danger – so it’s understandable he’d mine the genre again.  What places the cops in danger here is a calorie-free bent cop storyline that resolves relatively early, and a standard Maguffin plotline that features a stolen magic wand that a few factions want to acquire for themselves.  “A nuclear bomb that grants wishes” is how it’s described by Nick.  The wand itself looks like a mini lightsaber, and comes with rules attached – the only people who can wield one are “brights”, those born with special magical bullshit in a million-to-one ratio.  Given that this word is the title of the movie, you can probably guess where the movie is headed.

The premise of the movie is interesting, and fun (not in a comedic sense), and while it’s not completely original, I like movies that mash up genres and try to do something different.  Sure, Bright could have been about two LA cops trying to get an incriminating object to the Feds before it falls into the criminals hands, but who wants to see that movie over and over.  I enjoyed the early parts of the movie where the world-building is at its sharpest focus, and I liked the magic wand aspect – I also liked the nod to Lord of the Rings too (intentional, I hope), that shows Beverly Hills as being the exclusive domain of the Elves, all  rich, blonde, haughty, and gorgeous.  There’s an intriguing subplot too – and it builds well, at first through graffiti,  then an interrogation scene, then in the Maguffin plot itself: 2,000 years ago “the Dark Lord” was defeated, but now an Elven cult known as the Inferni plan to bring him back.  Led by a sleek looking Noomi Rapace, these Elves seem more like vampires out of the Underworld movies, and their introduction as the villains of the piece herald the descent of the movie from something interesting, to a more or less formulaic chase movie.

The movie never really lost me as a viewer, but the second half is definitely more of a time waster than what comes before, and the main problem is a complete lack of development, so the potential is lost, disappearing like, as the saying goes, tears in rain.  Despite the wand being described in such gigantic terms, you never actually see the wand being used as anything other than a boring weapon.  Despite the build up of the “Dark Lord” subplot, the movie barely moves in that direction at all.  And despite the Inferni being some kind of driven, religious cult, they’re mostly a trio of personality-free unkillable Terminator-like bad guys.  It all becomes very much a seen-it-all-before storyline, where once the world of the movie was established, Landis was content to just let the story play out with minimum effort.  At the end, things are wrapped up conveniently and neatly, and there’s no real sense that anyone has lost anything (dare I say it?) precious, in fact I was annoyed how the wand’s storyline actually ended, given that the characters who ultimately come to possess it exerted no real influence on the actual plot of the movie.  It’s a movie where there doesn’t appear to be anything really at stake because of Landis’s story choices, and when Ward and Nick’s storyline resolves, you more likely to say to yourself, “That’s it, huh?” than feel any kind of satisfaction.