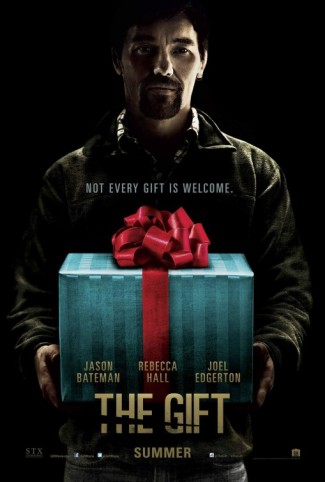 I don’t exactly recall why I didn’t want to watch The Gift theatrically, but there were a few reasons; the trailer was too formula – it reminded me a little too much of Lakeview Terrace, that Sam Jackson movie where he terrorizes his neighbours, which I did watch and found it to be a bit of a potboiler.  The Gift, then, was guilty by association.  Jason Bateman isn’t a particularly noteworthy actor – I’ve seen a couple of his movies, and he’s okaaaay, but I always think of him as Justine Bateman’s brother.  Then there was Joel Edgerton, who’s never really struck me as an actor whose work I have to rush to see – when I have watched him, he just feels like a background character, not someone overly interesting, or possessed of any great technique.  Three strikes, as they say.

Traveling, as I am today, to LA, I loaded up my tablet with a few movies, and The Gift was one of them, but it wasn’t even my first choice; I only turned to it because I couldn’t muster enough interest to watch Miss Peregrine’s Home For Peculiar Children.  Turns out, it was a pretty good choice.

Jason Bateman and Rebecca Hall play an upscale married couple, Simon and Robyn, who move from Chicago to LA.  He’s an ambitious, mid-level executive type, she is his sad-faced, stay at home wife whose recent pregnancy was either terminated or ended in a miscarriage after complications.  In the past, she owned her own company, but now with the move across the country, she’s using the time to pick up the pieces.  Early on, there’s a strong sense that this move wasn’t all her idea, nor the choice to stay at home, and this is confirmed in a series of small scenes that define the current status of she and Simon.  One day, while shopping for home décor, they meet a high school acquaintance of Simon: “Gordo”, played by Edgerton.  Something’s off about the guy.  You know it right away, but can’t quite put your finger on it.  Haven’t we all had that one chance encounter with someone from our past, where you or the other party, or both, have moved on, but forced politeness creates that weird elevator moment, and meaningless small talk ensues, and you just can’t wait to get away?  The polar opposite of a meetcute.  So yeah, Gordo is that guy you just don’t want to hang around with any longer than a handshake, a quick hi, how ya been, then seeya later.  Simon leaves the meeting with that feeling.  Robyn is quicker to see a different side, but is quickly overruled.  Soon after that, they come home to find a housewarming gift, a bottle of wine, waiting for them by their front door, and then Gordo starts to come around when Simon is at work, and things go from awkward to tense, leading to an inevitable confrontation.

The Gift is a decent suspense thriller for sure, but it did seem a little familiar to me.  I was reminded a lot of the Martin Scorsese remake of Cape Fear in a couple of areas.  They’re big areas, though, unable to ignore or circle around.  The biggest similarity here is the theme and plot.  In  Cape Fear, Nick Nolte is terrorized by DeNiro’s boorish, obsessive, thuggish Max Cady because of a decision Nolte made to withhold critical information that could have freed Cady instead of getting him locked up for years.  Cady is the self-appointed bringer of justice, to teach his former counselor the meaning of loss.  In The Gift, revenge slowly becomes the theme of the movie, and it’s paced not dissimilarly to Cape Fear either.  Somewhat egregiously, Edgerton plays Gordo in a way that feels like a copycat DeNiro performance from the 90s.  It reminded me not so much of Max Cady, but more like that of Gil Renard, DeNiro’s obsessed baseball fan in The Fan.  I haven’t watched a lot of Edgerton, but enough to know Gordo isn’t a signature performance.  Throughout the movie I felt he was aping DeNiro – it isn’t an offensively xeroxed performace, it’s decent, and appropriate for the movie, but I always felt I was watching an actor who decided to “play it like DeNiro” first, instead of trying to interpret it himself – but guess what!  Not only does Edgerton play Gordo, he also wrote the movie, directed it, AND co-produced it, so if this seems like I’m ranting, time to scale it back.  Edgerton actually does a terrific job, all things considered.

Overall, the movie is surprisingly well polished, given the depth of Edgerton’s involvement.  It’s awkward where it needs to be, incrementally tense throughout, and the plot never relies on flashy moments to pull it through any weak spots (there aren’t many).  I liked how, as the plot develops, so too is the true character of Simon revealed, until the story demands that the audience considers picking a side, a nice plot mechanic by Edgerton.  It’s good, but Robyn gets a bit of a raw deal, I thought.  Early in the movie she’s got a full third share in the plot, but from the midpoint, while both Gordo’s past is revealed, and Simon evolves, Robyn doesn’t change much as a character, nor is the audience given any special insight into her.  She stagnates for the most part, and it’s somewhat disappointing.

But that’s about the worst I can say about the movie.  Even if the production hadn’t been an Edgerton one-man show, it would have been as watchable as it is.  There’s nothing particularly astounding about it all, but it’s much more than a potboiler.  At times, it reminded me of Karyn Kusama’s The Invitation, but maybe just because of setting and lighting.  Both movies take part among the upper middle class permanently ensconced in the LA burbs, permeated by an undercurrent of that smug condescension so unique to these kinds of characters.  In The Gift, just like The Invitation, I was looking for the downfall of Simon, the way I did for the annoying party guests – a selfish kind of wish fulfillment – but it’s in the ending that Edgerton’s skill as a writer comes into focus.  Far from the movie content to sit on its reveal, Edgerton gives the plot one further twist that’s dreadful in its implications, resetting the characters in a way, and providing a future path to redemption for Simon, and ultimately condemning Gordo.  Is that final gift an act of true revenge, or is it the brutal teaching of a much-needed lesson?  It’s ambiguous at the end, as it should be.  Real life is never that black and white, and Edgerton is a smart enough moviemaker to realize that.

7 thoughts on “Movie Review: THE GIFT – Joel Edgerton’s one man show can’t escape familiarity, but is still twisty and suspensful”