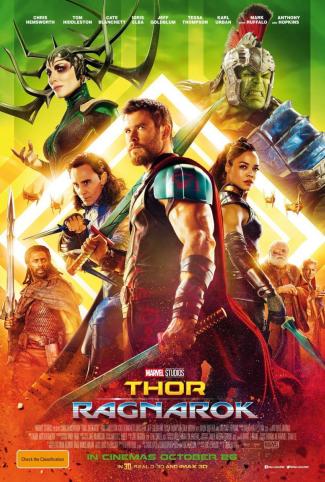 I confess, even though I had a busy November (moving, buying furniture, Thanksgiving, tight deadlines on other projects), I mostly am only just getting to review this movie due to laziness, having seen it way back on opening weekend.  Movie watching is also down, but I hope to bounce back bigly in December.  ANYWAY, here is what I have to say about the latest Marvel movie, and specifically the latest Thor movie!  Enjoy!

I recall reading Thor: Ragnarok had the biggest opening of the three Thor movies – surprising, considering the second movie, Thor: The Dark World was an utterly miserable affair, a critical and (relatively speaking) commercial dud.  I disliked that movie a lot – almost as much as Iron Man 2.  These two movies bookend the Marvel cinematic universe with their lack of quality storytelling and relevance to the overall impressive shared universe.  The Dark World was a big disappointment because I’m one of the few people who seem to actually like the first Thor movie.  It certainly missed a big chance in Act 2 to instantly humanize the character and give him a truly redemptive arc, but in Chris Hemsworth the casting genius of Marvel Studios proved its worth.  I found the character of Thor a lot more fun and interesting to watch than the actual movie, and this is what the studio has capitalized upon with Thor: Ragnarok.

From the opening scene, Hemsworth absolutely owns the movie.  His timing is superb, and he’s game enough to play the character exactly as written; supremely arrogant yet utterly clueless about how others see him.  The dichotomy is both endearing and funny without ever reducing the character.  One scene in particular captures that, I feel: the one where he tries to activate the quinjet using various failed password attempts.  Yet this scene, like others in the movie, is logically problematic for me.  I can buy someone forgetting their password, but his guesses imply that he simply has no idea that he ever had one to begin with.  In short, the scene is written purely to generate a smirk or two, but with no thought given to a realistic situation.  Am I being nit-picky?  Perhaps, but good screenwriting works with realism in order to generate emotion.  We have all forgotten our passwords at some point, but we all kind of know what they should be.  Here, the scene simply plays on a familiar situation but it ends up making Thor appear genuinely dumb.

The overall story is similarly unfocused.  It’s like they decided that Ragnarok was going to be a comedy from the get go and so decided to treat the story lightly too.  I felt it mostly hamstrung Taika Waititi’s directorial job and undercut the dramatic peaks of the movie, resulting in a lightweight, fun-but-forgettable affair.

I’m a big fan of Waititi’s previous two movies, What We Do In The Shadows and The Hunt For The Wilderpeople, much smaller movies that showcased his talents well.  Ragnarok is like so many other big budget movies given to directors who primarily work on smaller projects, in that the signature style is often buried between long CGI-bloated action scenes, and diluted simply by the nature of being the same size cog in a much more massive machine.  It’s hard to say exactly what Waititi brought of himself to the project, given that the actual screenplay is credited to Eric Pearson, Craig Kyle, and Christopher Yost.  I do recall that Waititi favoured improvisation on set, and that’s likely the more successful of the comedic scenes.   Outside of those, the movie feels anonymous, unlike the last two Captain America movies, which have a definite stamp of directorial authority on them.

The movie has three writers, as mentioned, but they all fail to deliver a strong storyline, and without a strong storyline, very few of the characters in the movie, or the situations they are in, feel substantial.  There are actually two storylines running through it – note I said two storylines, not one storyline with a strong subplot.  It’s a poor device, with each detracting from the other.  In one storyline, Thor must survive a cosmic gladiatorial contest presided over by The Grandmaster, played here by Jeff Goldblum, who exists mostly to be the new Christopher Walken.  Not that I don’t like Goldblum, but I preferred him when he was an actor, before he became capital Q quirky.  Here, he’s just Jeff Goldblum wearing a colourful costume and wig, and I probably missed a comic book storyline somewhere, but this half of the movie reminded me of the classic Lee/Kirby FF two-parter where The Thing is kidnapped from Earth and forced to, y’know, survive a cosmic gladiatorial contest.  This is the funny half of the movie, featuring the mostly satisfying buddy-movie pairing of Thor and Hulk.  Though again, the script does very little to explain just how Banner got abducted in the first place.  I’m sure the table talk went “Let’s have Thor fight The Hulk!” so they cobbled together some elements of the celebrated Planet Hulk storyline from a few years ago and figured that’s all the fans would care about.  Like I said, it’s mostly satisfying, but the vapidity bothered me.

Likewise, the other half of the movie, the sober and serious half of the movie featuring Cate Blanchett as Hela, the “goddess of death”, is lightweight and serves only to force change upon the franchise, in the form of destruction, and a spectacularly weak version of the Ragnarok story of Norse legend.  I know, I know, you don’t watch Thor movies for a retelling of The Poetic Edda, but I’m really well versed  in Norse mythology, and this annoyed the hell out of me.  To wax chauvinistic for a moment, this version of Hela would have annoyed me too, if not for how the visual of the character is one of the hottest female characters I’ve ever seen.  It might not be other people’s cup of tea, but I’m a sucker for this look all day.  Hela’s a whole snack! 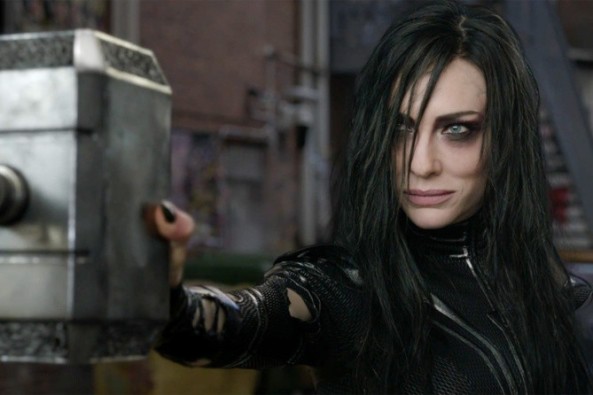 But that’s about the only good thing I can say about this part of the movie.  Karl Urban’s Executioner character gets saddled with a howlingly awful redemption arc, and Asgard suddenly becomes Helm’s Deep.  In scenes I didn’t fully comprehend, it appears that the vast majority of Asgardians are simply powerless peasant types, there to be lorded over by the Big Guns like Odin, Thor and Loki.  I always thought Asgardians were ASGARDIANS, but Ragnarok contradicted that in a lazy, cliched way, and was utterly uninteresting to me.

While I’m complaining, I’ll mention that I’m sick of seeing Loki.  I wasn’t really a fan of his from the get go, and in subsequent appearances in the Marvel movies, the character has mostly become The Dick Move Guy.  Not evil by any stretch of the imagination, just kind of annoying in a mostly predictable way.  In Ragnarok, it’s just more of the same with some added laffs.  It works, but it’s entirely unengaging.

It seems like a really negative review for a movie I mostly enjoyed, but flaws are there to be pointed out, especially because I liked it as much as I did, in part because I want to convey to you how much more I wanted to like it.  It’s a great looking movie, it zips along quickly, and the performances by just about everyone are pretty good to really good (in context, of course – nobody is going to win any major acting awards here).  I just wish whatever writing talent Kyle, Pearson, and Yost possess had combined to create a great story to go along with the laughs, instead of turning in a serviceable script that didn’t really try hard to do much of anything.

PS: I wrote a Ragnarok-themed short story last year for a TNT Horror Story contest.  While I didn’t win, it will be included in volume 2 of my upcoming 2 volume anthology of short horror fiction in 2018, named Don’t Look Now.  Feel free to read the story here!

WHAT WE DO IN THE SHADOWS

THE HUNT FOR THE WILDERPEOPLE