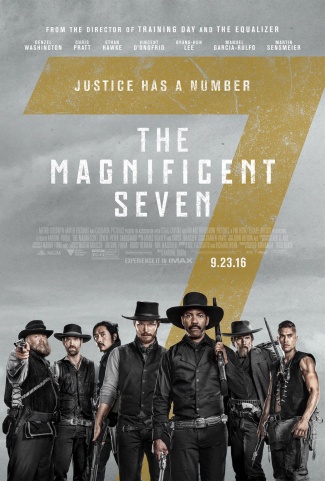 Although I haven’t seen the original The Magnificent Seven for the best part of 20 years, I still retained enough memory of the plot to try comparing it with the 2016 Antoine Fuqua (Southpaw)/Denzel Washington, and from those hazy memories, there didn’t seem to be many large deviations from the plot.  Instead of a village being raided by bandits, it’s a small (and kind of unconvincing) western town bullied into submission by Bartholomew Bogue, a mining company owner (played by Peter Sarsgaard) who wants the surrounding land, and the vein of gold under it.  After a brutal opening wherein Sarsgaard’s armed goons kill a few of the more rebellious townsfolk, the widow of one takes it upon herself to seek vengeance, and a way to stop Bogue from plundering what remains of the townspeople’s land.

At the time of release, it was 56 years between both movies, and with that kind if time span, there’s not a lot of value in comparing them – especially when you add into the mix that the classic original was in itself a remake of the Japanese classic, The Seven Samurai, directed by the legendary Akira Kurosawa.  It is worth noting, however, that the entire plot has been recycled numerous times since 1960, so that while the new one is certainly a remake, it’s more appropriately viewed in the same context as other movies, some of which are themselves pretty famous, some not so much – The Dirty Dozen, Battle Beyond The Stars, Star Trek: Insurrection – even Saving Private Ryan.  On TV, Marvel Defenders are coming up on Netflix in a couple of months.  I’m crazy, right? Reducing these plots to their basic elements, what you’re left with is this: A diverse group of heroes join forces to carry out an almost impossible mission to save innocents from oppressing forces.  During the course of the story, you find out important details of each character, mostly endearing, identifiable qualities to allow for audience identification because in the run-in to the finale, a number of them may have glorious death scenes.  I could also add Peter Jackson’s Lord of the Rings saga, because I think most people who have read the books would agree that Jackson’s approach was more Magnificent Seven than JRR Tolkein.

The latest iteration of the story sees Denzel Washington assemble a team that includes Chris Pratt (Passengers, Guardians of the Galaxy Vol.2), Vincent D’Onofrio, Ethan Hawke (Predestination), Byung-hun Lee, Manuel Garcia-Rulfo, and Martin Sensmeier, but the problems I have with the movie start here.  The movie essentially has only four sequences; the opening scene that establishes the villain, the gathering of the troops, the training of the townsfolk, the final battle.  The spaces in between feel like bland filler – but there is a LOT of the same in the selfsame four key scenes.  Can you remember back to 2010 or so when McDonald’s “pink slime” was outed in the media?  I’ll let you look it up for yourself, but essentially, so much of the writing in this movie (the screenplay is credited to True Detective’s Nic Pizzolato and Richard Wenk, who has left a lot of bland thrillers in his wake, including Jack Reacher: Never Go Back)  is the cinematic equivalent of pink slime.  There are a lot of scenes in the movie where I just didn’t care what happened.  Instead of feeling like they meant something either to the plot or to serve character development, they felt dramatically inert and uninteresting.  The movie is called The Magnificent Seven, but instead of filling out all the roles with big names, the order of importance is so glaringly obvious that when you rank the characters in order, you are left with Washington and newly-minted Pratt, then Hawke, then a huuuuuge gap between him and D’Onofrio, and by the time you hit the final three, there’s nothing left to interest you.  The characters are given sketched-in traits that you can see in video games: The Native American is silent, good with arrows.  The Asian is slightly less silent, and is great with knives.  The Hispanic is … well, his only true skill is some mild riffing with Pratt’s character.  Washington’s Avengers Assemble is also pretty bland.  There’s almost no conflict involved, no real work his character has to do besides tell them, “Got a job. You’ll get paid, but might get killed.” And the response is mostly, “Ok.”  In no time, the Magnificent Seven ride into the beleaguered town and set about doling out a lesson than Bogue’s henchmen can return to tell him.  It’s all done in a lazy, effortless way.  Every bullet and arrow finds its mark with unerring deadly, boring accuracy, and all done in a brightly lit, colourful little western town that feels like it just came out of the carpenter’s studio lot.  So here I have a problem with the story content AND the setting.  One of things I grew up on was westerns – not that I’ve ever been a huge fan, but the ones I enjoyed were those that showed the grime and dust and general uncleanliness of that era.  This movie is more like the expensive tourist theme park of HBO’s Westworld, than any of Sergio Leone’s epics, and through it, the movie suffers badly from a lack of visual authenticity.

When the story moves on to the obligatory training of the townsfolk, it’s done so matter of factly, that none of the townsfolk get any time in the spotlight.  They might as well be robots, they’re so devoid of personality.  You might well say, but the movie isn’t about them, it’s about the seven saviours, and while you’re right, the lack of any kind of framework outside of the basic concept made me ask why.  Why does any of these seven guys care about this town?  Why do they care about the people?  There’s almost zero interaction between the seven heroes and the town and its people beyond a couple of perfunctory lines of dialogue.  At no point does the script call on them to actually be invested in what’s happening – it’s like they don’t even care about the money!  This lack of true motivation really took me out of the movie around the halfway mark.  If the heroes in the movie don’t really appear to care, why should I, the viewer?

Fast forward to the climactic battle, which seems to last an eternity.  Having set up some elaborate traps and strategies, Bogue arrives with a small army of personality-free, bad hombres on horseback, and if the movie hadn’t lost me before this point, it would have lost me for sure here.  When the bullets start a-flyin, it’s like the earlier scene when the Seven ride into town for the first time.  Every shot hits its mark fatally.  The bad hombres, all of which simply exist to be killed, are cut down by bullets that find their mark EVERY time, at EVERY range.  It all feels so familiar.  If you’ve watched both Avengers movies, zombie movies … any movie that features a small group of heroes killing a vast, nameless, faceless horde, the ending to The Magnificent Seven will neither interest nor excite you.  Nor will the inevitable deaths of Those Heroes You Loved, nor the defeat of the bad guy, because it’s done in such a way that the inevitability of the ending is never really in any doubt.  I mean, c’mon – we know the bad guy is going to get defeated because that’s what happens 99% of the time.  But even though we know it, we keep going to movies, right?  It’s the job of the writer to make the inevitable victory of good over evil be satisfying, for it not to feel easy for the good guy, but it felt like Pizzolato and Wenk completely forgot this.  Instead, they spring from nowhere a hidden motivation within the Washington character, as if they realized “Oh shit, we need to throw something in here.”  It’s a resoundingly dumb plot development, but really no worse than the rest of this woefully underdeveloped time-waster.