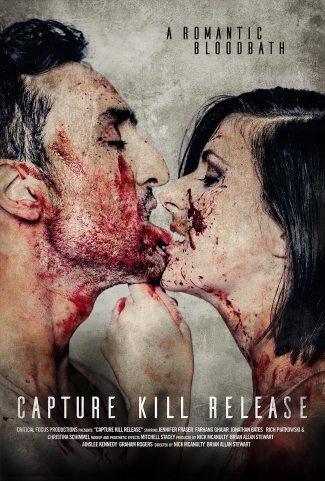 Ugh, expectation … it’s a cruel mistress.  Sometimes you get what you wanted, but most times once the thing you’re waiting for finally arrives, you think, “Man, I really hoped it would be better.”  And sometimes the reality is so badly out of sync with expectations, it’s almost wondrous.  My expectations for Trainspotting 2 were tempered by the fact that 21 years had passed since the beloved original movie, and that period encompassed a fair bit of change for me.  Capture Kill Release, on the other hand, showed up on my radar around early December 2016, and I finally got around to viewing it last night.  Talk about badly out of sync! This turned out to be one of the worst movies I’ve watched in recent years.  Knockout poster, though.

For anyone following my reviews, you’ll know that I’m a fan of indie horror – I seek it out because of guys like Mickey Keating (Carnage Park), Chad Crawford Kinkle (Jug Face), and Aroon Moorhead and Justin Benson (Spring) – I recently watched The Void, and enjoyed it quite a bit, thanks to a strong retro vibe in the execution.  Capture Kill Release has no such vibe – it’s strictly a found-footage horror movie.  But there’s no trace of the supernatural here, no ghosts, demonic possession, monsters, gateways to hell.  No, this is the story of Farhang and Jennifer, a young Canadian couple, and Jennifer’s obsessive plan to find and murder someone.  This is what attracted me to the movie originally.  I’m a fan of exploring the psychopathology of killers, and True Crime stories have always interested me.  From early on, it seemed like a mix of Henry: Portrait of a Serial Killer and American Psycho.  That’s probably the kindest thing I can say about the movie.

For anyone planning on watching it, who may feel they’d be distressed by the content of the movie, I’d say you’re not in much danger.  There are very few scenes of gratuitous gore, and it doesn’t take a strong stomach to sit through it.  What it does take is great patience, and a good amount of stick-to-itness.  About 10 minutes in, I was on the verge of turning it off, but my daughter, who was watching it with me, told me we had to see It through, so we did.

The plot of the movie is essentially what I described.  The story has a little more meat, and some conflict that peaks (and plateaus) about a third of the way through, and there’s a subplot that gets resolved, but there’s not a lot of actual story here.  This is mostly the blame of writer (and co-director) Nick McAnulty.  If there’s an actual screenplay for this movie floating around, I’d be amazed if it runs any more than 30 pages.  This is one of those low-budget pictures where the director will give out the basic content of the next scene up, then leave it to the actors to improvise the rest.  I could call it lazy writing, but it’s pretty common in the world of cheap indie features.  The dialogue itself isn’t terrible, and the premise is decent enough, but the minuses are HUGE, and mostly revolves around the character of Jennifer.  I have to say, this character is one of the worst I’ve had to endure in a movie-length feature, and it’s probably NOT the actress’s fault, because the entire movie just smacks of rank amateurism behind the camera.

I can imagine plenty of people are lined up to talk about how incredible the movie is, and how amazing Fraser is in it, but that’s completely the opposite of how I saw the movie.  Jennifer is deranged, I get it, but she spends the entire movie depicted as a super peppy, fun-loving 20 something wife WHO JUST HAPPENS TO WANT TO KILL SOMEONE.  OMG, for FUN, you guys! Can you believe it?!  It’s so neat and CRAZY!  The times when Jennifer is not That Annoying Woman That Everyone Knows, she’s petulant and angry.  Both sides of this coin make it almost impossible to understand why her husband Farhang (played, naturally, by an actor named Farhang Gajar) has any interest in spending any part of his day with this woman.  Farhang is, ostensibly, the audience surrogate.  His role is to be horrified that the shallow, two dimensional narcissist that he married actually wants to go through with the plan is the conflict that peaks relatively early, but then stays at pretty much the same level of opposition from that point on.  Dopey and clueless to a fault, and lacking any kind of forceful personality, he’s a perfect foil for his wife.  Literally every time he says he’s done, she browbeats him by shouting and saying fuck a lot.  There are probably couples who are exactly like this, so I’m not saying the movie is unrealistic here, just saying that watching a whole movie about these two cartoonish dimwits was like sandpapering my brain.

If anyone is old enough to have trawled sites like Ogrish.com back in the early days of the internet, you may have come across the infamous series of photos taken by a young naked couple during the dismemberment of the woman’s husband.  Pretty gruesome stuff, and perhaps they influenced the creation of Capture Kill Release.  The fun part about this story is that they took the camera to a pharmacy to have the pictures developed, but of course, the staff called the cops as the images emerged and they were arrested.  Here is the link to the story AND the pictures, but BE WARNED.  THE PICTURES ARE VERY GRAPHIC.

In the movie, both Jennifer and Farhang are similarly dense – they talk about not getting any DNA left behind in their apartment when they eventually decide to go through with the plan, but don’t mind recording everything for posterity.  If the cops are at your place to look for DNA, that handy search warrant they’ll bring with them will uncover the video recorder in a snap.  I know, I’m thinking too much.

Getting back to the improv comment, the hapless victim here, a homeless non-entity by the name of Gary (Jon Gates) gives a rambling speech straight from a level two class that’s excruciating to listen to.  In a movie that’s dependent on seemingly naturalistic dialogue (only Farhang’s comes close) to carry the threadbare story, Gates is a low point of the movie.

I guess I can understand the intent of the movie – to show monsters can be just like regular people – but it falls flat on its face early on, with no hope of recovery.  I could have invested more of myself into the story if there was ANY indication that Jennifer was anything other than a walking, talking plot device, but unfortunately that’s all she really is.  There’s no sense that McAnulty and his co-director Brian Allen Stewart had any interest in showing depth to her.  They’re not incompetent – I suspect Jennifer is exactly the kind of character they wanted to create, but I was unimpressed by the thin Patrick Bateman-like veneer they pasted over her in an attempt to shock audiences.  I was neither shocked nor horrified by anything this woman did, because I could always feel in the back of my mind I was watching a movie character painted with broad brush strokes.  Other than a scene with her mother, the character appears in a vacuum.  She’s clearly smart, but doesn’t appear to have a life outside of the apartment she shares with her husband.  She’s cute, but almost completely vacuous and facile in pretty much every scene that she’s in, and I struggled to maintain any interest in her for most of the movie.

The subplot, featuring some guy Jennifer takes umbrage at (after a drastically overcooked exterior scene) is resolved in the final act, and in a strange way had more weight to it than the actual main plot.  There was at least an actual motive to what happens in the last ten minutes of the movie, unlike the thrill-kill mainplot that held little of any interest to me.

I was glad when it ended.  Far from it being the harrowing, ultra-realistic gaze into the abyss of a psychopath’s mind I expected, the harsh reality was that Capture Kill Release is an emperor’s new clothes kind of experience, and that there was really nothing there worth seeing at all.