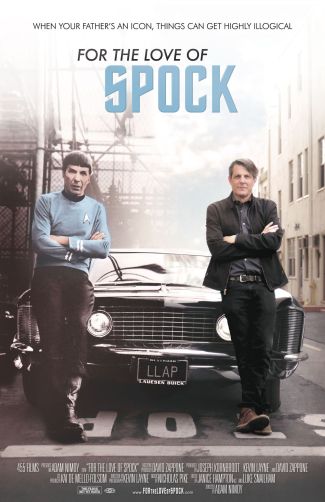 For The Love Of Spock, as director and interviewer Adam Nimoy explains early on, is not the movie that would have been made if his father Leonard had not died in 2015.  Originally, the documentary was supposed to be a full on exploration of Star Trek’s beloved Mr. Spock, but Nimoy’s death turned it into more of a biopic about the man, rather than the character.  Of course, a documentary solely about Spock would inevitably have focused a lot on Nimoy himself and may not have turned out too different from the work that eventually came to be, but the differences would have been notable, I think.

I admit that I didn’t much like Adam Nimoy to begin with – he gave me some off-putting Hollywood-phony vibes from the start, and reminded me a lot of the kind of characters played by actors like William Sadler and Jesse Eisenberg; arrogant, smug, and somewhat condescending.  But here is where the elder Nimoy’s death makes a difference: the longer Adam Nimoy stays in the frame, the more the documentary becomes an elegy to his father, and becomes a quiet reflection on the part of the son.  It’s inevitable that their stories are intertwined throughout the piece, and around the halfway mark, my opinion of Adam Nimoy changed.  There’s a lot of autobiography within the documentary, as well as biography, but For The Love Of Spock isn’t just about the Enterprise’s First Officer, it’s also about Adam Nimoy exploring the complex relationship he had with his father, who just happened to play one of the most enduring figures in pop culture history.  The story is told with a quiet melancholy, which makes sense given the timing.  Leonard Nimoy’s life is recounted by the interviewees in a warm, but funereal tone.  There’s no hint of bitterness, nor outright sadness, but not a lot of joy either.  Given the nature of the documentary and how soon after his death it was shot, it’s appropriate and reverential, without ever straying into sorrow, and it struck the right tone.

Leonard Nimoy’s death in 2015 foreshadowed the vast amount of celebrity deaths in 2016 by a year, and while I’ll be perfectly honest and say that neither his nor those who died after him affected me, it’s his death that holds more meaning for me.  Star Trek is one of my earliest memories.  I’m pretty sure that when I watched the series on our wee black and white telly in Scotland, it was the first run of the third and final season.  I would have been five at the time, and in the years that followed, Star Trek was on repeat many times from my early childhood through early teens.  It seemed that the BBC would run it every other year.  When I attended Balornock Primary in the north of Glasgow between 1972 and 1976, my friends and I would venture into a huge vacant lot to play Star Trek.  It had been the sight of the famous Springburn Locomotive Works, but had been demolished in the early 70s.  By the time my friends and I started sneaking into the lot, it had become overgrown with weeds, but it was a patchwork of different environments – in one corner, giant concrete blocks seemed to have been dropped like cyclopean Lego bricks.  In other places, large bodies of water seemed like lakes to us.  The truth of the place is likely to have been more mundane than how our young minds perceived it, but to us (and, especially, me) it was perfect for inventing our own Trek scenarios.  We’d all meet after school at the giant entrance to the lot.  The gates had been removed, but the walls of the place remained, towering over us, seen at the center of this picture: 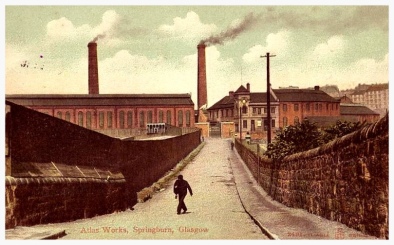 We all wore our trousers tucked into wellies, and I recall having a small Matchbox car that had a loose trunk lid – I used it like a communicator, flipping it open with a Kirk-like flourish.  I don’t recall any of the storylines we improvised, but I do remember the fun we had doing it.  I moved away from there in 1976, and I never saw those friends again – almost the entire area was transformed by a destructive and incompetent phase of city planning soon after.

I include this slice of biographical detail because in the context of viewing For The Love Of Spock, I couldn’t freely communicate why my connection to the documentary is an unironic, unfiltered direct connection without it.  As I mentioned in my review of The Love Witch, when one has not lived through the times or events chronicled by a documentary or reproduced in a movie, there is no direct connection, no nostalgic, psychic anchor.  I don’t doubt that members of a younger generation could come to love the character of Spock, but they would have come to classic Trek by means of other, contemporary shows first, and never would have experienced it without seeing it through the lens of better writing and production values.  I argue that one can never have the true appreciation of an original without encountering the original first.  For me, the original Star Trek is still the best.

But time for a confession, and an honest one at that.  I could easily say that Spock was my favourite character and just play up my connection to this documentary, but the truth is, I was a huge fan of Kirk.  While I greatly appreciated Spock, I was more in tune with Kirk’s brashness than I was with Spock’s methodical approach, a preference which is a little ironic: as a person, I’ve always been more like Spock than Kirk: deliberate, critical-thinking, perhaps even a little aloof and detached from things.  Yet, even though I preferred Kirk, what I loved about the show was the relationship between Kirk and Spock.  In the decades that have followed, I can’t think of any shows where a strong bond of friendship between two characters is a primary element.  Can you?  I’d love to hear it if you can.  In Star Trek, you have two men who could not be any different, but their friendship is a fundamental part of their beings.  It peaks magnificently at the end of Wrath of Khan, of course, and explored further in Treks III, IV, and V, but in Star trek VI: The Undiscovered Country, the relationship between both characters felt flinty and hollow, to the point where it no longer felt like my Trek.

Adam Nimoy’s work showed me a lot about his father than I never knew.  The entire documentary contains sections of interviews, but also a number of old photographs and clips of home movies.   Along with Adam Nimoy’s own recollections, and those of his sister Julie, a picture emerges early on of a man whose unfaltering responsibility to his family’s welfare (and craft – though it’s never mentioned in the documentary, Nimoy adhered to The Method) ironically resulted in him being a less involved parent.  While the younger Nimoy discusses the divisions he had with his father, they’re never presented as being the fault of either, simply the generational gulfs that can, and do, separate us from our parents.  Throughout the movie, Leonard Nimoy is depicted as a good and loving father whenever he had the ability to be one, and I was glad to hear that in the few years prior to Leonard’s death, both men had reconciled and became close again.

The last half an hour of the documentary is where my opinion of Adam Nimoy changed from my earlier impression.  It’s in a small section that’s devoted to himself, but not for the purposes of self-aggrandizement, where he recounts his divorce after 18 years of marriage, then finding love with a woman who was diagnosed with terminal cancer 18 months after they were married.  It’s a poignant, human moment in a two hour work that celebrates a character famous for seemingly having no human emotions.  It’s worth noting that part of the documentary reveals Leonard Nimoy’s take on the character was not that Spock was emotionless, but that the opposite was true: Spock was, in fact, consumed by his human side, but fought at all times to maintain control over them.  It’s directly why his portrayal of the character was so effective, because I think we can all see that in the reruns, and it’s why Kirk’s elegy to him at the end of Wrath of Khan – that of all the souls Kirk has encountered, Spock’s was the most human.

For The Love Of Spock was crowdfunded through Kickstarter, something I didn’t know at the time.  It can be streamed on iTunes, Amazon, and Youtube among others, and features interviews with William Shatner, Walter Keonig, Nichelle Nichols, JJ Abrams, Chris Pine, Zachary Quinto, as well as various Nimoy family members.  While it’s never penetrating or indepth, it’s the kind of heartfelt, touching tribute one would expect, given the fact it was made by his son, and it’s a must-see if, like me, you grew up feeling connected to the series, or Spock himself. 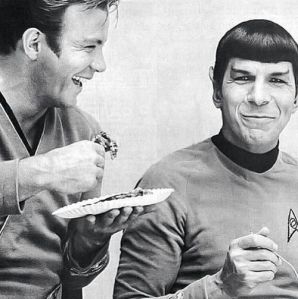