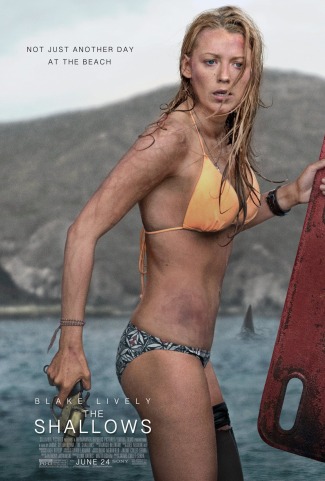 I can’t understand some people’s definition of horror.  Having watched The Love Witch, and found almost nothing horrifying about it, in either execution or intent, I watched The Shallows, which is described in various places as a horror-thriller, or survival-horror.  I admit, I’m a horror purist, but I just cannot imagine a definition of the horror genre so elastic it stretches far enough to encapsulate either of these two movies.  Especially The Shallows.  And I’m not talking about scary movies, because there are plenty of non-scary movies that are clearly horror.  The Shallows is NOT horror, it’s never even close to being horror, and I’m going to put words in the mouths of the writer (Anthony Jaswinski) and director (Jaume Collet-Serra) when I say this was never intended to be a horror movie.

This movie is closer in spirit to the immortal Jaws and its sequels than it is to the only real shark horror movie I’ve personally seen, Open Water.  The Jaws movies are more like adventure-survival thrillers.  They rarely present a realistically harrowing, horrifying experience for the viewer, or for their main protagonist.  Jaws comes closest to approaching the horror genre, but not by means of its shark attacks, or the gruesome death of Quint, but for the internal fears of Chief Brody, externalized by both the sea, and the shark itself.  Even so, you’d be hard pressed to find many people who would consider Jaws anything other than a thriller.  Open Water, I’d argue is a horror movie – the sharks themselves are not star villains of the piece like Jaws, or The Shallows, the terror of dying alone with no hope of help, of watching powerless as a loved one is killed – those are brutal tropes of the horror genre.  In Open Water, unlike The Shallows, death just doesn’t happen to characters low on the food chain on the way to the protagonist prevailing.

The most brutal shark horror media I’ve ever seen was as a kid, growing up reading the 2000AD predecessor, Action.  In this classic British anthology comic, published weekly, one of the stories is Hookjaw, a blatant Jaws-inspired strip about a Great White that somehow manages to evade being killed every week by those out for revenge.  Hookjaw, you see, is an unstoppable man eating machine, and I don’t remember there ever being an episode that didn’t feature chewed off limbs exploding from the shark’s mouth as the teeth ripped its victims apart.  Like this! 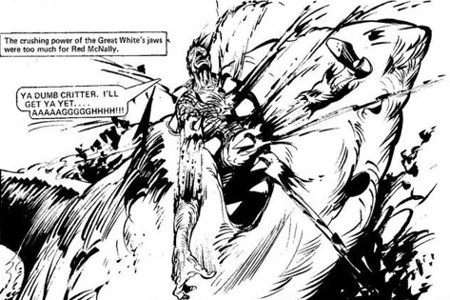 The Shallows would have benefited from this kind of comical ultra-violence, but as is, it’s an unconvincing, uninteresting hour and a half.  Nancy, played by Blake Lively, travels to a Mexican beach where her mother once stood while she was pregnant with her.  A weekend surfer, she spends some time on the water before finding herself at the mercy of a Great White that seems intent on killing anyone it encounters in the water.  That’s pretty much the entire plot.  The story itself is weak and ho-hum.

Nancy is a real non-entity, and that’s maybe the kindest thing I can say about her.  Jaswinski’s poorly written script offers movie-cliché depth, bolting on attributes to make her seem like a real person, but they’re little more than lazy footnotes.  She’s thinking about dropping out of medical school because her mother just died of cancer, but she never actually seems affected by this.  We’re only told in weak expository dialogue about these qualities.  The writing is so amateur that there’s no real sense that Nancy is anything other than a movie character.  The other minor characters are given zero depth, as if Jaswinsky was unable to comprehend the value in making the other characters even the least bit interesting.  This is practically summed up at the end of the movie where a character from the beginning appears, but Nancy doesn’t give the slightest indication that she cares he’s even there.  It’s an infuriatingly bad script, and the two scenes where Nancy is talking to herself where performing minor medical procedure are mind-numbingly awful. When the one-year-later coda drops, Nancy appears none the worse for wear, in fact, she’s ready to hit the waves again all fresh faced and smiley – but now she has a cool scar!  It’s like the preceding 80-odd minutes never really happened.

Unfortunately, that isn’t everything that’s wrong with this production – after a decent enough –  but overlong opening, the story spends an inordinate amount of time showing Nancy getting ready to surf, then surfing, then meeting up with two fellow surfers, then surfing again … the entire first act has almost no conflict whatsoever – that comes in the form of an expository telephone call she has with her father and sister in which the audience is told her motivation for coming here.  I know, right?  Jaswinski is all to blame for the content here, but Collet-Serra, and Flavio Labiano’s cinematography are similarly duff.  The sheer amount of slow-motion and rotating camera on display in the first act is nothing short of shocking.  It’s the way a teenager with a great camera would film a movie, thinking it’s just the most stylish thing in the world to do.  Trouble is, it’s far from it, and if it was intended to disguise the fact that almost nothing happens in this section of the movie, it fails miserably.  While I’m on the soapbox, I’ll also mention that there are two other highly annoying elements in Act 1 – the music is a brain dead cacophony of Spring-Break level dance bullshit.  You know, the kind of crap that you might move to while drunk, but would never consider putting on a sober playlist?  The other thing is a visual conceit that wears out its welcome almost immediately – when Nancy is on her phone, her screen pops up In Scene to show us who she’s talking to or texting.  The same conceit shows up later when her watch face appears.  I don’t doubt that there are people out there who think this is innovative filmmaking, and that’s likely the kind of reaction the filmmakers would be pinning their hopes on (it did make well over $100 million at the US box office), but it’s childish and gimmicky.

Lively isn’t a terrible actress, but she’s not a terribly good one either, and by now, if her career was going to pop, it already would have.  Look, the script is flat out terrible, and she didn’t write it, but good actors are able to transcend material.  Throughout the movie, Lively never gives a sense of having technique of any kind.  She’s flat and unconvincing, and in moments when she has to act (like when she’s in pain), it’s like watching someone who just doesn’t know how to play the scene, and Collet-Serra is too weak a director to get anything worthwhile out of her, or there’s just no real ability there to begin with.

I could talk about the silly end to the shark (I’m guessing you won’t really consider that a spoiler), but I won’t bother.  It’s not just silly, it’s dumb, and visually it didn’t do anything for me at all – pretty much how I felt about the entire movie.

4 thoughts on “Movie Review: THE SHALLOWS – Blake Lively fails to stand out in a frustratingly annoying shark-attack movie.”