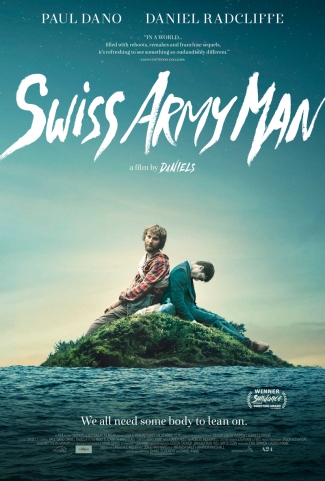 I don’t typically dismiss a movie based on a trailer, and I wouldn’t say I’m particularly prescient about a movie based on a trailer either, but when I caught the trailer for Swiss Army Man, I balked.  I remember coming away from it thinking, whaaaaat? and probably wasn’t alone.  But I generally like Paul Dano’s characters, and while I can take or leave Daniel Radcliffe, I’m impressed with his continuing efforts to escape the career event horizon known as Harry Potter, so I figured I would see it at one point.  Last night was that point.

What I knew about the movie going in was exactly what I’d seen in the trailers – Hank (Dano) finds a corpse (Radcliffe) washed up on the desert island he’s marooned on and uses said corpse to try to escape the island and return to civilization, via jet propulsion from the corpse’s farts to using it to chop wood, etc.  That’s the core story, but it’s a lot deeper than that.  At first we don’t know much about Hank, other that he’s stranded on this desert island and is about to commit suicide, but once the corpse washes up on the shore and exhibits some powerful flatulence, it’s clear early on that the movie (written and directed by Daniel Scheinert and Daniel Kwan – credited in pretentious manner as “Daniels”) is not a literal story of survival, it’s a fantasy.  I wasn’t sure if the story that unfolds was going to be a dying man’s fantasy, like Ambrose Bierce’s often-imitated An Occurrence At Owl Creek Bridge, but it was clearly not meant to be taken literally.  Even with that established in my mind, I was turned off by the execution from the get go.

I’m not sure if Scheinert and Kwan intended the movie to be funny or serious, but for me, farts and hard-on jokes are always going to be associated with juvenile humour – it’s hard to disassociate things once pop culture and sniggering adolescence has set them in stone.  Likewise, as the movie progressed, the new “powers” exhibited by the corpse (nicknamed “Manny” by Hank) and exploited  by Hank for the purposes of his survival bugged the hell out of me.  Even though I understood the events to be imaginary in the context of the story, the literal depiction of them just seemed like a collection of quirky-for-the-sake-of-it visual devices.  There are so many of them, the novelty wears off quickly and the movie became tiresome for me to watch.  It felt like I was watching a film school project made by students eager to get noticed above the others – and as such, it works.  I’ve just devoted a lot of this paragraph saying just that.  But as a narrative, the devices fall flat.

Which is a shame, because once you understand what is actually happening, in extended scenes throughout act 2 where Hank and Manny interact in a way that explores Hank’s inner psyche, you become involved in a mostly rewarding and emotionally honest search for the truth – I liked the way the movie engaged me to want to see the thing through despite my annoyance of the execution.  The truth isn’t hidden too much, though, so when I say a search for the truth, it’s not that kind of ticking-clock turn-the-place-over scenario, it’s more like picking through books on a shelf, and when the truth is finally revealed and laid bare, it’ll be mostly what you expected but it is somewhat satisfying.

But here’s the thing about that ending.  You spend most of the movie with a growing, deepening understanding of Hank, and like many of Paul Dano’s characters, there’s an overpowering sense of someone crushed and broken by the world, of someone who, despite the overwhelming daily struggle that someone with mental issues faces, at their core, they are sweet and vulnerable people.  This is the Hank that Scheinert and Kwan want you to find, but they almost blow it badly when certain things about him are revealed, and how those things are perceived by others in act 3.  It’s like finding the quiet and shy librarian girl you’re crushing on has a two packs a day habit and tells jokes about “retards”.  The movie builds up this impression of Hank that it wants you to find, and then, when you find it, the writers show you an ugly truth that really goes against the grain.  Is that how real life is?  Well sure, all the time – but why spend an hour and a half leading you to the heart of a character via a fantasy world and THEN inject harsh reality into it?  It didn’t make a lot of sense to me to do that to the character, but maybe some people appreciated that – it didn’t sit too well with me.

This is a movie I had a hard time rating, and that rarely ever happens to me.  As I watch a movie, I am very conscious of the rating I will give it, and how that rating will change throughout the running time, and Swiss Army Man had so much in it that completely turned me off, yet I was always aware throughout that I was seeing something that contained a lot of talent.  The movie looks gorgeous, the writing is mostly smart, Dano is typically terrific … those are major pluses for me, but it collapses under the crushing weight of whimsy in a way that I’ve never seen before.  I’d like to think that Scheinert and Kwan are smart enough filmmakers to not build a career out of making one quirk-heavy movie after another, but I guess Wes Anderson has already paved that path, so what do I know.

After being undecided whether to hate it or consider it worthwhile viewing, I’ll split the difference: