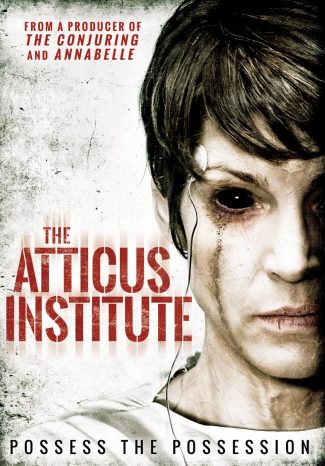 What is it with these “best of lists”?  In my quest to watch and review the “best” horror movies of various years, I’ve watched a couple of clunkers recently from these lists.  The Atticus Institute, written and directed by Chris Sparling isn’t a bad movie like The Hallow, it’s more of a great-premise-executed-poorly movie, like It Follows.  I can’t get my mind around movies that are badly written like The Hallow, because it makes me wonder how a script like that gets green lit in the first place – in the case of movies like The Atticus Institute, the vast potential of the premise is wasted by a script that never really gets going and continues to plod along without hitting any kind of great heights of characterization or, indeed, horror.

I’m a sucker for movies about psychic phenomena, and the mysteries of the universe.  Now, don’t take that to mean I believe in any old shite – in fact, I don’t believe in anything paranormal or supernatural.  I just happen to be drawn to the stuff.  In one of those odd coincidences that the universe occasionally belches forth, the movie opens with some footage of famed Russian psychic Nina Kulagina – one of the subjects of some research I’d conducted earlier in the week for a short story in my forthcoming horror fiction anthology.  Plug aside, the movie is promising, but falls a bit short here too.  The opening sets up a movie called The Atticus Institute for sure, and plays itself as a mockumentary of sorts, with various talking heads recounting the past, expanded on by the use of still photos and taped footage of experiments with Zener cards, telekinesis, and such.  Those moments are decent enough for setting a place at the table, and justifying the title, but then, when the movie whips out its ace in the hole archplot, the movie itself suffers because the framework around it is too weak to support it.

Trying to remain as spoiler-free as possible, it’s no real surprise that the key plot point of the movie is demonic possession, since it’s given away in a couple of the posters I’ve seen.  I won’t reveal what direction the movie goes in with it, suffice it to say I liked the concept a lot, but it essentially cuts ties with the implied premise in act 1, and the title.  The movie isn’t really about The Atticus Institute, it’s about one event that happens within it.  The movie isn’t really about the setup scenes in act 1, it’s about demonic possession.  A minor quibble, you may think, but structurally, its poor.  It’s like buying a nice looking little house then discovering the interior work hasn’t been done when you move in; it’s all artifice.  The lead in to the possession angle is handled okay, transitioning from the supposed plot to the actual plot in a series of scenes, but Sparling drops the ball by making the possessed antagonist, Judith (Rya Kihlstedt) completely devoid of personality from the get go.  By the time she’s in full-on movie-possessed mode, I found that I really didn’t care what happens to her.  Despite a couple of characters bemoaning that she was being treated badly by the authorities in their attempt to understand and exploit the possession, there’s precious little of the actual narrative that tries to engender the same feelings in the audience.  I can’t stand a writer paying lip service to plot points via dialogue; it’s lazy and implies a lack of real writing talent.  First rule of good moviewriting, Show, Don’t Tell.  Unfortunately, plot in this movie is everything.  The clever premise steamrollers just about every other element here, resulting in a dry, lifeless movie full of stock characters whose sole purpose is to get the story from A to B with the absolute minimum of effort on the part of the writer/director.  When I spent much of the time noticing physical resemblances between the top-billed actor of the production, William Mapother, to his more famous cousin – and realized I was doing it –  it told me that there should have more time spent in script development.  There just is way too much plot and not enough story in this movie – which isn’t to say the movie is overplotted: in fact, it isn’t.  The actual plot is relatively straight forward and simplistic,   it’s that the actual story is really that threadbare.  And to spend the whole running time of this movie only to discover at Fade Out, that the second half of the movie contains virtually zero plot progression AND leads to no resolution of either plot, OR story whatsoever, is really shoddy work.

I’m finding that when it comes to these smaller horror movies, the ones that fail the most are those with a writer/director at the helm.  Even though he might have come up with a pretty great premise, Chris Sparling doesn’t provide any proof that he was the guy who should have actually written this movie.

This review was originally published on 4/10/2016 at https://thatsnotcurrentblog.wordpress.com