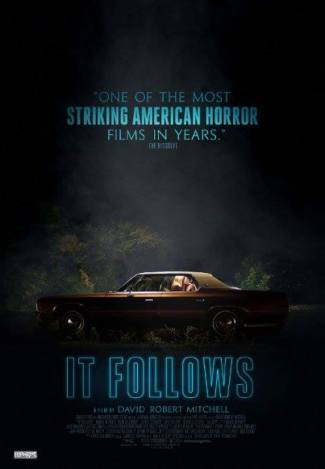 I decided to finally watch It Follows after reading someone’s “best of” list of recent horror movies. It wasn’t someone I knew, just a clickbait title. It was pretty high on the list too – maybe the top slot – and it made me recall similarly high praise elsewhere when it was released, so I took the plunge. My immediate reaction was similar to the befuddlement I experienced after watching Mad Max: Fury Road: a good movie, but nothing remotely deserving of the insane hype surrounding it. [weird factoid: although I had no reason to think so, I went into the movie believing it to be a British independent movie, so the opening was a bit jarring].

It’s too bad, because I loved the premise. It felt like something I would write. The plot seemed organic and not forced too, felt like it unspooled well, despite a few bumpy patches. I also liked the setting and characters. No super-rich spoiled and entitled teens in this movie. I thought all of the characters were likeable, and the lead actor (Maika Monroe, Independence Day: Resurgence) was extremely good – I think she could be a name to watch in the near future. If you’re like me and are tired of movies about wealthy/hot/ironic characters and their problems, It Follows is somewhat refreshing.

But this isn’t a glowingly positive review. While I liked the premise, and don’t need plot details to be spoonfed to me, I didn’t appreciate the mysterious entity remaining utterly unfathomable throughout the movie. It just became a supernatural Terminator, minus the personality. I get that it absolutely will not stop, ever, but I needed a bit more than that, told in a way that was expository.

Earlier, I mentioned that the story is doled out well, but the pacing is awful. I understand that the following entity is relentless and slow, but the pacing of the movie didn’t have to be. I thought that the movie started coming apart when the chums all got together for a proactive “Let’s Team Up To Kill It” ending. It felt weak and shifted the movie from the ultra personal tone of acts 1 and 2 to the generic third act. I found that the more these characters tried working together, the less interested in all of them I became. I also felt that the ending was poor, in that there was almost no character development with the main character, given the intensely personal nature of the curse. The opportunity for a great ending was seeded multiple times throughout the movie, but instead the writer/director settled on something as vague as the entity itself.