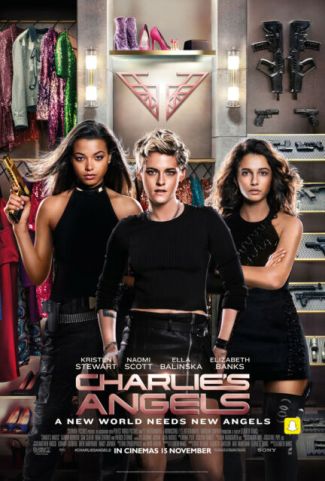 I’ll confess to being a boring moviewatcher.  I am not one of those types who can get into bad movies, nor can I ever describe a bad movie that is somehow so bad it becomes good.  I just don’t have that capacity.  Bad is bad.  I suppose I also have a grudge against bad movies.  It takes a lot of money and a lot of talented people to make a movie, and when I watch a movie that fails on the basics, I actually get angry.  And I’m not talking about microbudget productions where anything that rises above competent is a success, I’m specifically talking about multiplex features.  Why do these movies get made?  Who finances them, and why?  These are questions I wondered even before the stupendously terrible Charlie’s Angels had ended.

I was outvoted by the other two members of the Hope family.  This tenuous continuation of the Charlie’s Angels reboot was not something I would have picked to see in the theaters, and pretty much as soon as the movie started I had a feel for what was coming: FEMALE EMPOWERMENT.  I put it in screaming all-caps because there’s a real difference between what true female empowerment is, and the phony kind.  The real stuff is women being put in the spotlight and being recognized for their efforts and contributions to society – in short, female empowerment is showing the next generation of women that they are every bit as equal as men.  And why not?  The gender split is 50/50 pretty much, so that should be recognized and promoted.  The phony kind is created by marketers, cheerleading, scripted, this-is-what-you-want-to-hear meaningless garbage, designed to sell product.  And from the get-go, Charlie’s Angels is simply one long facile, fake “women are CRUSHING it” piece of fluff.  In this movie, men are simply incompetent or evil with the exception of saintly Djimon Hounsou, who gets offed early on.

My rule of thumb in life and business is “you don’t make yourself look better by making other people look bad” – it’s something I think is undeniably true, and I like to think that when weak-minded people use this deflection tactic, the people around them are smart enough to realize this.  Charlie’s Angels’ message is essentially this: men are duplicitous and bad, but women are strong, smart, and brave.  It’s a harmful message, especially when tossed around so casually just to make money.  I’m a guy.  I’m not a bad guy, nor a duplicitous guy, not a stupid guy – and I don’t personally know any either.  They exist in multitudes, though – but there are lots of shitty women in the world too, you know.  To deny that is to simply toe the corporate, product-pushing agenda of the marketing profession who have a whole new platform with which to make more money for their clients: focus on telling women how great they are, and the money will roll in.

The good news here is that sometimes the message becomes too blunt, too obvious that it becomes rejected outright, and I’m pleased to see that Charlie’s Angels is an unmitigated box office disaster.  Apologists have complained that the trailers were not attractive enough, but the reality is you can slice and dice a bad meal any way you like, but it doesn’t change the flavour.  The only interesting scene in the movie is the opening when the Angels are introduced – mostly in the form of Kristen Stewart’s character.  I liked this scene, it was playful and edgy at the same time, and I happen to like K-Stew.  I thought it was a promising start.  And then the movie started proper and I knew what I was in for.

It’s a classic double-cross story, something the “spy” subgenre is known for.  It happened most recently in Mission Impossible: Fallout.  The bad guy is revealed as one of their own ALL ALONG.  Nothing new here, but execution is everything. Charlie’s Angels is written for an undiscerning, unthinking “it is what it is” audience.  It is less concerned with delivering the goods onscreen than it is with riding the crest of the phony side of the female empowerment movement.  The characters are weak, the action insipid, and the comedy is of the Big Bang Theory variety, where it’s all about one-liners, not actual situational, character-driven comedy.  True female empowerment would have given us something more like a team of capable women doing something that means something.  The stakes in Charlie’s Angels are simply to chase ownership of a bare-bones, barely-explained technological Maguffin, a piece of technology called Calisto that reminds me of one of those old Simon games.  At no time in the story does it ever feel that anything really is at stake here..  Terminator: Dark Fate is a certifiable box office dud too, but I had no problem with the female-led action, because the stakes felt high to those characters.  If they buy it, we buy it as an audience.  Charlie’s Angels does not have characters who acknowledge the true importance of their goal.  They spend time being cutesy girls in between the action scenes, not doing anything to further the plot.  When Sabina (Stewart) and Jane (Ella Ballinska) gate crash a party in a fancy European mansion, the movie stops to show them having a little dance in a scene that could have been in any movie that has a party in a fancy European mansion.

This is not a movie that is written as much as it was simply stitched together hastily from some scene ideas, mostly cribbed from other movies.  The assassin Hodak (Jonathan Tucker, not doing himself any favours) is simply just another version of Robert Patrick’s implacable T-1000, instead of being a unique personality, a character that one could talk about after the movie ended like Crispin Glover’s Thin Man in the 2000 movie.  Elizabeth Banks – one of my favourite actresses – is listed as the writer here, but that’s a title she does not deserve by creating this stinking pile of garbage.  In other hands there might have been a watchable, entertaining movie made from these characters, even  – and God help me for saying this – Damon Lindelof could have written something more cohesive and coherent than this.  As an actor, Banks was decent as always, Ballinska was okay, and I actually did like Stewart a little in this, despite her being a collection of tics and one-liners that felt like on the spot improvisation.  Sir Patrick, on the other hand, was pretty awful.  I can’t NOT like someone who was both Professor X AND Jean Luc Picard, but man does he look and sound frail these days.  I just could not buy him in this role, but I’ll concede that mostly it’s due to his character having as much depth as what you’d get in a PS2 game cut scene.  Yeah, I said PS2.

Ultimately, Banks’s garbage screenplay was not just financed, but actors also agreed to appear in it – decisions I will never understand.  Ballinska needs exposure and money, so too does Naomi Scott (the newly minted Angel), I can get that.  But Patrick Stewart probably doesn’t, and it’s a very strange choice of movie for Kristen Stewart.  With this and the upcoming sci-fi horror Underwater, I think she needs a better agent.  She’s a capable actress who deserves more, and if she’s looking to move into more prominent roles in bigger movies, this is already a step backward.

Banks has recently attempted to defend her movie (she also directed it), by choosing unwisely to obliquely attack the Marvel franchises, and she’s already suffered a backlash for it.  As well as her screenplay making men look bad to elevate her own weakly-written female characters, she tried to do the same with the entire movie.  I didn’t buy her defense that her movie was good in comparison to something else, it was really just a huge piece of shit.