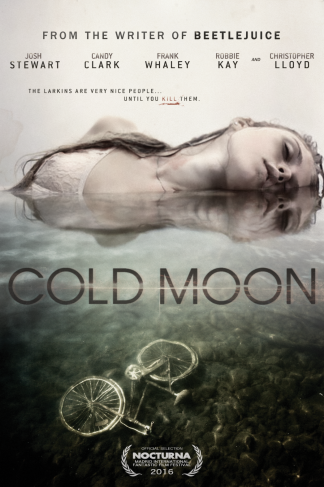 This is a movie I would have reviewed anyway, even if I hadn’t received a screener copy to review by the company promoting the movie, or the invitation to attend the LA premier at the Ahrya Fine Arts Center on Wilshire Blvd, and that’s because I remembered reading and enjoying the novel upon which its based – Cold Moon Over Babylon, by the late Michael McDowell, which is one of the books Stephen King recommends at the end of his non-fiction work Danse Macabre.  High praise, and I recall it being worthy.  The question on my mind was, would the movie adaptation be any good?

I decided to attend the premier on October 5, 2017 mostly because I hadn’t attended an LA premier before, and because I was expecting the stars to turn out.  As it happened, the two biggest names in the cast – Christopher Lloyd (Back to the Future, I Am Not A Serial Killer) and Frank Whaley (Pulp Fiction,Netflix’s Luke Cage) did not appear.  Even so, I enjoyed the occasion.  Unfortunately, I can’t say the same about the movie.

As a disclaimer for the rest of the review, I admit that I don’t have a full recollection of the novel, having read it one time only, in the mid 80s, so there could be things in writer/director Griff Furst’s screenplay that seem underwritten because that’s how they happened in the novel.  By the way, I feel the promotional materials are vastly misleading, leading with “From the writer of Beetlejuice and The Nightmare Before Christmas”.  For the record, Michael McDowell wrote the former, and did indeed have a hand in the writing of the latter, but Griff Furst is the writer of this movie, and the other credit is somewhat disingenuous. With that out of the way, I can say that I knew off the bat I wasn’t going to like the movie.  Early on, I got a sense of a cheap production.  The cinematography by Thomas L. Callaway is uninteresting and flatly lit, and the score (I can’t find the name of the composer anywhere at time of writing) is tonally all over the place, and doesn’t seem to have any real thread running through it.  Likewise, there are some noticeable editing gaffes where some spoken dialogue doesn’t match the actors’ mouths – all things that would have been prevented with more diligence in the production.

But okay, technical nitpicks aside, from what I do recall of the story, it does resemble the novel.  It’s a Southern Gothic tale of how three very different families’ fates become intertwined and embroiled in supernatural revenge.  Nathan, of the Redfield family, is the instigator, compiling a fairly spectacular list of crimes in a short period of time.  When he murders 14 year old Margaret Larkin, it sets in motion a series of events that forces Nathan to commit a series of crimes each one designed to cover up the others, at the same time haunted by the spirits of those he has killed.  It’s a pretty standard plot, and considering the novel itself is short, there was not a lot Furst needed to cut, but his screenplay itself feels thin, with some unexplainable, and pointless, elements.  Chiefly, when Margaret is murdered by a masked man, very little time passes before the killer is confirmed as being Nathan, so there’s no time to build any mystery in the movie.  Also, the mask is pretty bizarre looking – it’s so bizarre that it hints at greater depth of the Nathan character, but nothing at all is made of it.  It might as well have been a bandana over the mouth.  Then there’s the plot point of Evelyn, the Larkin family matriarch, attempting to hire an attorney from a neighbouring town to prosecute Nathan, despite there being no evidence for an arrest.  I’m pretty sure you can’t hire a prosecuting attorney, since that’s the job of law enforcement.  It’s either an element held over from the novel, which Furst should have improved on, or it’s Furst’s own element.  In either case, there was a sloppy lack of research.  And while I don’t need to be spoon fed plot points, I really struggled with the supernatural aspect of this movie.  While I get the basic premise of how the spirits of Nathan’s victims want vengeance, I didn’t feel like there was any overarching context.  Southern Gothic is defined by a creeping pervasiveness of dark forces, soaking into daily life like mold, the strong sense that all events are heavily influenced by the sins of the South itself.  In the movie, the ghosts just kind of appear in this small town that doesn’t at all feel like how it should feel, and the story feels weightless.

It isn’t helped much by the performances which are all weak and flat – and this is where Furst the director takes the blame.  Lloyd and Whaley can act, but not here.  Lloyd’s very brief screen time is filled with a bizarro, laughable performance, and Whaley is phoning it in in pretty much every one of his scenes.  Josh Stewart goes through the entire movie with a flat, slab-faced expression that, frankly, is just boring to watch.  Switching Stewart and Whaley would have given the movie a real shot in the arm.  Young actor Robbie Kay (Heroes Reborn) gives probably the best performance here, but his character is little more than a foil for Stewart’s.  The worst performance by far belongs to Rachele Brooke Smith whose Belinda Hale is a two dimensional bimbo, existing only to show us her body in various states of undress.  I don’t blame the actress here solely, because Furst, as director, is the one who is meant to coax performances out of his cast, and as writer is responsible for the words the actors say.  I felt embarrassed about the objectification of this actress – she does not come away from this movie well at all.

In the end, I struggled over how I was going to review this movie, but only because the PR company was gracious enough to invite me to the premier.  Still, it does neither me or the movie any good to totally eviscerate it.  I have to believe that Furst went into this production hoping to make a good horror movie, but it just never happened.  I actually sat right behind him and to the left, and studied his reactions whenever the audience laughed, which was a number of times, and only because those times were flat out bad.  I didn’t see many reactions from him at all, and I wondered why.  If his goal was to make a good horror movie, he should have been mortified by those reactions.  If he wrote those moments to be funny, then shame on him for not fulfilling the spirit of McDowell’s novel.  I suppose I’ll never know.

One thought on “Movie Review: COLD MOON – cheaply made and mostly forgettable adaptation of a classic 80s horror novel”