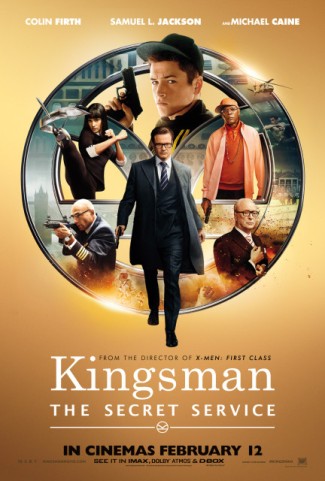 ***Caveat: This review was written as a mere Facebook post upon viewing the movie upon its original US release, in February 2015, but I thought I’d post it here to give some kind of reference to the sequel, Kingsman: The Golden Circle.***

The clumsily-titled Kingsman: The Secret Service is Matthew Vaughn’s latest adaptation of a Mark Millar comic book, in this case, The Secret Service, by Mark, and legendary Watchmen co-creator Dave Gibbons. I never finished the actual mini series, but I read enough of it to know that this adaptation is more Wanted than Kick Ass, in terms of how faithful it cleaves to the source material.

Kingsman is yet another “The One” type movie, where someone on the wrong path is unwittingly possessed of great abilities, and when trained by the right people, they, and only they, can defeat the threat ,etc etc. Yeah, you’ve seen this trope many times before (Wanted, The Matrix) – it’s probably on equal footing with the “One Last Job” movie, which can be seen as a kind of bookending of the Hero’s Journey.  Here, the protagonist has fully realized his potential, is a little past his peak and close to retirement before an offer, or threat, comes along to make him take on one last job (Inception, Logan). In the  case of Kingsman, the “one” is a young Londoner who the script takes great pains to show that while he’s a bit of a loser and troublemaker, he’s got a heart of gold, so he doesn’t need to be reformed (which would have been a LOT more interesting), just has to be nudged a little to fulfill his destiny.

The movie sets itself up to be little more than a James Bond spoof with a tired and mostly uninspired screenplay by Jane Goldman (Kick Ass, X-Men: First Class), with a ludicrous villain in the ubiquitous Samuel L Jackson, and an equally ludicrous plan that tries meekly to lampoon our tethering to the internet and mobiled devices. Said plan even lampoons your typical Bond storyline, but it’s so simplistic that it could have been conceived by a teenage would-be screenwriter. Add to that a plot-killing “group-training” sequence threaded throughout Act 2 and you have a largely mediocre screenplay.

But hold on! What the movie DOES have in its favour is a triple whammy that offsets the bad. First! Matthew Vaughn is an EXCELLENT director of close-quarters action scenes. While they get repetitive in Kingsman, the standout scene of the movie where Colin Firth almost singlehandedly slaughters the entire racist, sexist, homophobic congregation of a Deep South church in Vaughn’s signature ultra fast, ultra violent, jittery style is so deliriously over the top it dazzled me. I’ll be honest, I love this kind of scene, and it’s done amazingly well. Second! Colin Firth! Who doesn’t like this guy? He’s the original Benedict Cumberbatch, known for playing your stiff-upper-lipped Englishman. Here he plays against type and he’s terrific. I totally bought him in this part. He plays it with more gravitas than the movie deserves, and more power to him for that.

But third, and it could be a big third – Taron Egerton plays the main character here, and it’s a real breakout performance – not because he has to act much, but because of his presence and overall charm. He’s fun to watch every time he’s in a scene, and I could see this guy having a massive career if he can choose which roles to play, and which moviemakers he has the option of partnering up with.

Overall, it’s not going to go down in the annals of cinematic history as any great work, but on some level it comes together entertainingly enough thanks to Vaughn, Firth, and Egerton. 3.0/5.0