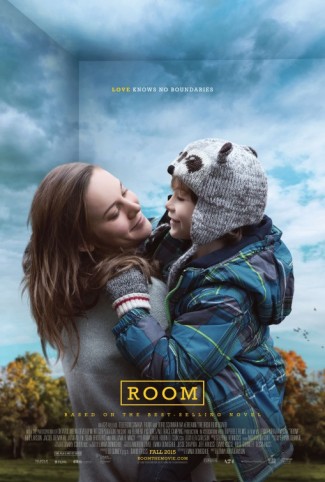 The human mind is a complex thing.  Where it resides is the great unfathomable mystery, and is as much a debate for philosophy as it is for science.  We will one day fundamentally change as a species once customizable DNA becomes commonplace, something which, as a transhumanist, I welcome.  But the body in comparison to the mind is simple.  A biological vehicle piloted by the human mind, the real “us”, it’s no more than a complex Lego set.  But the mind is subject to very subjective stimuli, from an astonishing array of sensory input to organic chemistry.  No two people are alike inside, behind the everyday screen we put up, showing people what we want to see.  It’s perhaps the most fragile part of us, easy to damage, hard to repair.

Room, the 2015 movie directed by Lenny Abrahamson and adapted from her book of the same name by Emma Donoghue, is at its core a story about the power and weaknesses of the human mind.  On the surface, it tells the story of Joy Newsome, a role that won Brie Larson (Kong: Skull Island) the Academy Award for Best Actress, a young woman who has been held captive for seven years, following her abduction.  In that time, her captor has raped her repeatedly, resulting in a child, Jack, played by Jacob Trembley (Shut In).  Over the course of Jack’s development, Joy has protected him from the personal hell of her own life by raising him in the prison in which they are held.  To Joy, the small room with stove, TV, sink, bed, is solitary confinement, but she has raised Jack to understand that it represents their entire universe.

The first half of the movie deals with their day to day life; Joy’s mental fortitude in dealing with the situation for seven years, five of it raising a child, is impressive, but the moments when she us unable to cope are powerful, and Larson’s performance is tremendous, possibly a career high.  The relationship between Joy and Jack was terrifically well done, with Larson matched by a quite sensational performance by young Tremblay, who was eight at the time of filming.  One of the great things about movies is the power to draw the audience into totally foreign worlds and bring about understanding.  On a surface level it happens with science fiction movies all the time, but there’s a difference between the ability to suspend disbelief, and that of the strength of the human mind in adapting, finding elements of familiarity to make sense of the new and different.  Here, we in our prime viewpoint as audience are gradually introduced into the stuffy, claustrophobic little cell that Joy has turned into a home for Jack, thus we gain that sense of familiarity.  They cook, they bake, they play.  Joy’s mind has transcended her own personal hell in a way that reminded me of the Roberto Benigni movie Life Is Beautiful, which deals in similar themes.

Just as Benigni’s movie was drawn from a real life story, Donoghue’s novel was directly inspired by the  Elisabeth Fritzl case, an Austrian woman imprisoned by her own father for 24 years, and whose repeated rapes led to seven children.  It’s a harrowing story of the depths that humanity can sink to, and puts the events of Room into perspective.  I could have said something like, “it makes Room look like a walk in the park!” but the truth is, Room is a monstrous fairy tale all by itself.

I normally don’t put out spoilers, but I can’t fully review the movie without saying that Room is a movie of two halves, where the second half is the aftermath of Joy’s forced imprisonment.  It’s here that the movie truly deals with the fragility of the human mind, the “spirit”, if you will.  With a producer less inclined to stick to the novel, Room would have finished with Joy’s escape.  She’d be on the verge of being recaptured by Nick (Sean Bridgers, who puts in a much better performance here than he did in Jug Face), but then the cops would arrive, or she would beat him, and the credits would roll with her triumphant re-emergence into the world.  Instead, the movie wisely continues from the point of freedom and shows us the effect of captivity upon her.  The second half of the movie definitely takes us to places that show Joy in a different light.  Free of no longer having to be Jack’s sole inspirational figure, we can see the effect that submerging her own feelings have done to her.  How often do we see the mental effect of imprisonment in movies?  It doesn’t happen often.  Papillon is arguably the greatest example, but so often freedom is the endpoint, and we’re left with the happy feeling that freedom is enough, but the truth is too complex to be settled like that.  Stripped of humanity and all that comes with it, we become hollowed out, our psyches eaten away piece by piece, day by day, year by year, until all that’s left is a shell full of complex conflicting emotions no longer able to be controlled.

It’s in thinking about the gravity of the act of solitary confinement, that I find flaws in both halves of the movie.  One being that Jacob Tremblay is just too old to be playing a five year old.  It wasn’t constantly on my mind that Jack was a little too precocious and well rounded from being raised in a shed with one parent, but there were times that the normalcy of Jack’s world didn’t feel right to me.  No matter how incredible a mother Joy was, I just couldn’t buy that this kid was the end result of it.  Likewise, when Jack is forced to live in the post-Room world, his ability to adapt felt too much like a movie.  There are very few times in the movie where Jack is written convincingly, and in the second half, the character is portrayed mostly as the “inspirational child” trope.  So pure and innocent is this cinematic mainstay, he has the power to heal everyone around him.  And while Larson’s portrayal of Joy is splendid and solid throughout, the story goes through a mostly awkward transition between her broken and healing selves that felt underwritten to me – but by then the movie was already slipping into “overlong” territory.

To me, the first half of the movie didn’t have to be as long as it was.  Getting used to Room and Joy and Jack’s routines was fascinating, but the real meat of the story happened after freedom, and it didn’t go far enough for me in examining Joy’s PTSD, and Jack’s introduction to reality.  Still, this is a very good movie, and in the case of Larson and Tremblay, the acclaim is entirely justified.