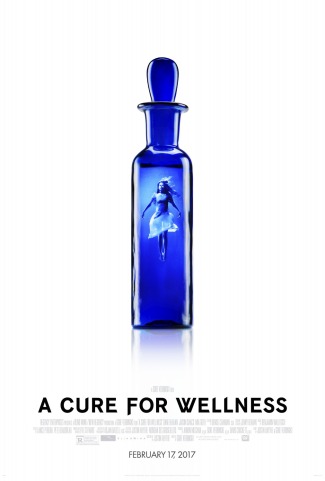 I saw two movies this weekend, both undone by serious overplotting.  I’m reviewing A Cure For Wellness here, but I’ll get to The Mummy all in good time.  The difference between these movies is that The Mummy is mostly bad throughout, and for a number of reasons.  A Cure For Wellness doesn’t become bad overall, but the plotting ruins what starts as a good movie.

So, overplotting.  You can read plenty of other people’s takes on it, some better than mine, some worse.  What does overplotting mean?  It doesn’t mean – although it can mean – a movie that’s confusing and/or complicated.  Overplotting is a matter of writers of little talent who either don’t understand their story, or don’t have faith in their story.  Story and plot go hand in hand, but they’re not synonymous.  Analogously, think of a movie as a wall.  Plot are your bricks, stacked side by side, one on top another. Brick upon brick upon brick.  Story is the mortar between them, holding everything together.  When you don’t have enough story, or when you don’t have enough faith in your story, the result is a flimsy construct built too high for its needs.  An overplotted movie is like building a ten foot high wall around your flowerbed.  I’ve lost count of the number of amateur scripts I’ve read that are vastly overplotted, and unfortunately seen too many movies where an overplotted script was placed into production.  With the former, there’s always the chance a writer will develop, but in the latter, these writers have gone as far as they can go creatively, but they’re now in the business, writing big soulless movies for that Thousand Oaks home with a view of the Santa Monica mountains.

A Cure For Wellness, written by Justin Haythe (Revolutionary Road, The Lone Ranger – he doesn’t live in Thousand Oaks, just sayin), and directed by Gore Verbinski (The Ring, and three of the five Pirates of the Caribbean movies), and starring Dane DeHaan (Chronicle, Life After Beth), is the story of Lockhart (DeHann), a young executive at a large financial services firm.  While some unscrupulous inside moves have allowed him to rise quickly in the company, they’ve also set him up to perform an errand for his employers: retrieve Pembroke, an older senior executive who has gone to a Swiss spa, before a perilous merger can be torpedoed by the SEC.  Traveling to the idyllic mountaintop retreat, Lockhart encounters strange goings on, which threaten to suck him into a deepening maelstrom of mystery.

This is a decent logline, and to be sure, the first half of the movie is very good.  I’ve been a fan of DeHaan since Chronicle, but he was also memorable in a bit role in a 2008 episode of Law & Order: Special Victims Unit.  I like the intensity and barely restrained rage his seems to bring to his characters.  I feel a depth to his work that I like.  When Spider Man was being recast, I immediately felt that if Sony were going to go in another direction from Raimi’s movies, I would have loved to have seen what DeHaan would have done with Peter Parker.  Instead, the role went to a badly miscast Andrew Garfield for two misbegotten movies (though in a twist, for me anyway, DeHaan was cast as Harry Osborne in The Amazing Spider Man 2 – talk about overplotted, this movie is a great example).  So when I saw him cast in A Cure For Wellness, it was a must see for me.

As soon as the movie moves from New York City, the audience is treated to a visual feast.  The scenes as Lockhart travels to the Swiss location of the “wellness center” are absolutely gorgeous, and shot with a refeshing clarity by cinematographer Bojan Bazelli.  I don’t know about you, but I grew up piecing together jigsaw puzzles, and my favourites were those depicting the old castles and towns of western Europe, and the early part of this movie gave me some warm and fuzzies.

When Lockhart arrives in the center and asks to see the man he came to bring back to New York, he’s immediately met with the roadblock of smiling, professional politeness.  Not long after that, as he tours the place while waiting, I got a strong sense of Shutter Island, a feeling that as well as things not being what they seem, that Lockhart was sent here for an unknown, hidden reason.   I liked the unfolding mystery that surrounding an 19th century nobleman who once owned the center, and the small, unsettling events that Lockhart encounters throughout the first half of the movie, and I also liked the focus on water tying everything together.  The patients come to enjoy the rejuvenating properties of the water from the spa’s aquifer; Lockhart is reminded of his father committing suicide in a downpour.  It’s all very dark and foreboding.  Then Jason Isaacs appears, and the overplotting kicks in.

There’s no connection between the two, of course, but I’m not a fan of Isaacs.  I don’t have any real reason for not liking him, I just don’t, and I find his presence in movies to be boring.  I didn’t feel much interest at all in his character, Volmer, director of the facility.  It’s also patently obvious that he is the villain of the piece.  Still, what drags the movie down is the writing.  When Lockhart is confined to the spa following an accident, and the movie moves past his exploration of the facility, the story slows to a crawl, doled out in between one plot point after another that don’t really further the actual story much.  They serve, in fact, to deepen the mystery to largely unnecessary degrees, as though Haythe is saying, “You thought THAT was mysterious?  Wait till you see THIS!” and so the second half of the movie goes on and on and on, with Lockhart never really making any inroads or scoring any significant wins along the way.

Where the movie really goes off the rails is in the reveal, though.  A hopelessly overplotted mess of a section dealing with eels, “vitamins”, the 18th century story, a mysterious waif described as being “special” (played by Mia Goth, Shia LeBoef’s wife), dental torture stolen from Marathon Man, some punks in the local village.  It’s all much too much, and the cumulative effect threatens to become silly, and overtake the story.

It’s silly, yes, but I was also really turned off by a climactic scene centered on Goth’s character.  I found it to be gratuitous, bordering on misogynistic, and completely unnecessary.  We’re living in somewhat enlightened times, in that the same scene in a Hammer movie 40 years ago would have been mostly acceptable.  Now, the content feels crass and exploitative within the context of this movie.  The entire third act climax undoes a lot of the thoughtful, slow build up the first half, culminating in a by-the-numbers action scene that, like the scene I just complained about, would also have been a perfect, Hammer-like climax, but now feels lazy and dated – quaint, like the idea of people smoking in planes.  A final nail in the coffin is the incredibly contrived appearance of four characters from earlier in the movie – a real “Seriously?” moment for me.

The movie would have been a lot more satisfying to me if the nature of the movie’s bad people were a threat of a wholly more familiar type.  I won’t say which, but it would have tightened up the narrative considerably, eliminating the over-elaborate “secret” of the water in the spa.  I was prepared to give the movie a solid 4 out of 5, but once the second half got rolling, it began shedding to a largely deserved

2 thoughts on “Movie Review: A CURE FOR WELLNESS – what starts as an intriguing, Shutter Island type mystery, ends up a sloppy, overplotted mess.”