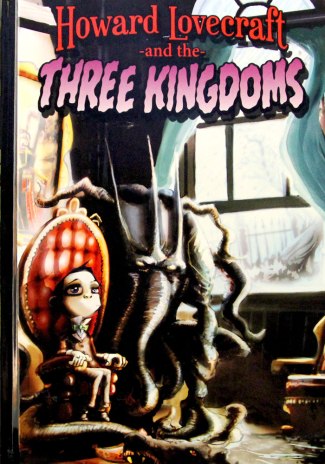 It’s always interesting comparing an adaptation to source material.  Conventional wisdom favours the original over the adapted work, but of course that isn’t always the case.  When it comes to movies from books, I can say that I prefer Kubrick’s The Shining to King’s, for example, but overall the richer experience is provided by the original.  Cinematic versions can omit or combine characters and situations, sometimes adding new ones for the sake of brevity, and with the right talent, these changes can work for the better – not not always, and not often.  A couple of weeks ago, I watched the animated children’s movie Howard Lovecraft and the Frozen Kingdom, and wrote a fair, but deservedly negative, review.  I won’t recap the failings, but I did promise to seek out the original work.  The movie is an adaptation of the first of three comic book stories, each published in three issues by Canadian publishing company Arcana Studio, and created and written by Bruce Brown, with art by Renzo Podesta (The Frozen Kingdom) and Thomas Boatwright (The Undersea Kingdom, The Kingdom of Madness).

The stories surround a young boy named Howard Lovecraft, and his adventures in three different realms, during which he must overcome the forces of darkness to save and restore a kingdom; to save his family from doom; to save his father from ancient evil forces.  The conceit here is that the stories are inspired by the works of H.P. Lovecraft, and the protagonist is himself a fictionalized version of Lovecraft.  To those who don’t know the name, Lovecraft is widely recognized as one of the most influential horror writers of all time – a trip to Wikipedia will tell you all you need to know.

In my review of the animated movie, I also made it clear that I’m something of a Lovecraft devotee and I tend to frown upon the pop culture that has grown up and around the man’s work – but I’m always willing to give something a try, especially if it tries to do something new and different.  The Howard Lovecraft stories certainly make an attempt to do just that, with varying degrees of success.  In the stories, Howard is assisted by his non-human companion which he names “Spot” – Spot is actually Cthulhu, an ancient deity (and the one Lovecraft creation that an entire cottage industry has grown up around) whose memories and identity were revealed as being hidden by magic in the first book.  Essentially, the series is a kind of HP Lovecraft meets Calvin and Hobbes mashup, and if that sounds weird, it’s meant to, and it mostly works.  It’s a clever enough take on the Cthulhu Mythos, and I liked the idea just fine.

The stories themselves are a bit of a mixed bag.  Oddly enough, while I lambasted the movie adaptation of The Frozen Kingdom, it actually cleaves very close to the comic book, hitting almost every plot point.  Unfortunately, the movie’s writing and visuals are strictly amateur.  In comparison, the story is much darker in both the writing and the artwork – but it’s all relative, of course.  The Howard Lovecraft stories are more dark fantasy than horror, and seem designed more for adult readers than children.  The stories all border somewhat on the whimsical side, and are loaded with references from the work of Lovecraft.  Unlike the Lovecraft-inspired recent work of Alan Moore and Jacen Burrows (Neonomicon and Providence), these stories are lighter and more playful.  Where the series succeeds is in creating this Lovecraft inspired universe without it seeming like it’s trying too hard.  The concept alone is a winning one, and I quite enjoyed the character of Howard himself.  Brown writes him as a Calvin-like kid: young, but sophisticated and headstrong, and the character remains consistent through all three stories.  This entertains, but feels vaguely unsatisfying when all three stories have been read – given the series has a finite length, I didn’t feel that Howard grew, or was changed by his experiences.  He learns things, but those are mostly personal things from his past, and the knowledge itself doesn’t seem to do much to change him or his perspective on things.

Having experienced The Frozen Kingdom already through the movie, I was more interested in The Undersea Kingdom, the second of the stories, but The Frozen Kingdom boasts some interesting dark visuals by Podesta that reminded me somewhat of Ted McKeever, an artist known mostly for his 80s work Stray Toasters.

In The Undersea Kingdom, the art of Thomas Boatwright echoes Podesta without imitating, and I thought that I could detect a hint of Mike Mignola in there, with use of heavy blacks and in the storytelling technique.

I liked this story too, but I was slightly disappointed by the introduction of the story’s secondary character, Smith, a policeman who knows the Lovecraft family well.  I can’t say exactly why, just that he broke up the narrative and turned the focus of the story away from Howard, but I understand why a strong secondary character was required – the story itself is too big for a single protagonist.  It mostly works, though, and I feel it’s the best of the three stories.

The final story is a markedly different drop in quality in terms of writing and artwork.  Even though The Kingdom of Madness is longer in total by 6 pages, the panels per page average (not including splash pages) is about 3.5 – the other stories average almost one full panel more.  The result is a much quicker read, with the dialogue swallowed up by the large panels.  In terms of story, Howard plays even less of a role here.  Smith returns, and the cast is added to by means of two more characters – Howard’s insane father, Winfield, and a scientist by the name of Herbert West.  I was disappointed in a couple of things in this story.  Oddly enough it doesn’t follow on from the previous story – it starts in media res, but almost too far into the story for me.  The lack of background – the why of the story not taking place after The Undersea Kingdom – goes mostly ignored as Howard, Smith, and Winfield travel to Antarctica where they meet up with West, in an attempt to save Winfield Lovecraft from the dark forces that have plagued him.  Here, the overt nods to Lovecraft’s work are too much in the forefront, and they overpowered the story for me, though that could be because the story is less dense than the first two.  It certainly isn’t helped by Boatwright’s artwork here – much of it just seems rushed and sloppy, though it does get tighter in the final issue.  I came away from the book satisfied enough, but the drop in quality in the final story was noticeably sharp. 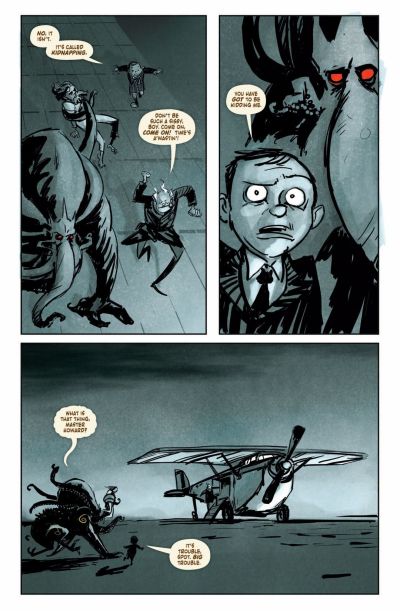 Overall, I definitely recommend this book, but I think hardcore Lovecraft fans like myself are going to appreciate it more than others.

Howard Lovecraft and the Three Kingdoms is available from Amazon and would be an appropriate add to your Lovecraft collection.