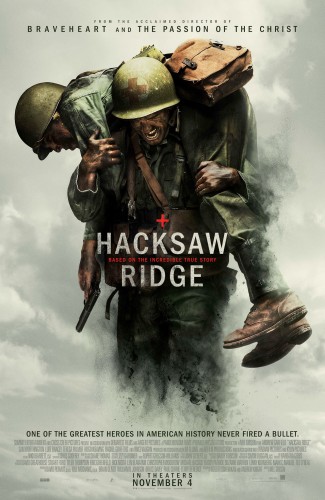 In these days of keyboard #outrage, it’s easy to be shamed by association, and even by not taking a public position against certain things or people.  The single-mindedness of the insulated social justice warriors of the internet draws crude inference from expressed lack of opinion, drawing associations where none are present.  I’ve seen it on Facebook recently where if one does not publicly condemn Donald Trump or Brexit, you must, therefore, stand for them and all the terrible things associated.  It’s a divisiveness that is nothing but self-serving.  I haven’t been a victim of this, but I read a very brief review of Hacksaw Ridge the other day that went along the lines of “if you pay to see this movie, you’re supporting the racist, misogynist views of Mel Gibson”.  This guilt-by-even-tenuous-association is disgusting, but it speaks more of the mindset of the “writer” than it does of the other party.

I speak for myself in regard to Gibson – I don’t care enough about what he says for it to prejudice my opinion of his work, and movies are a collaborative medium, so why would I let one person’s moronic view of life allow watching movies – one of my favourite activities – to be compromised?  I choose not to.  Gibson is not the only one in the world to hold unsavoury opinions – he just happens to have been dumb enough to have them recorded.  I’ll make it clear here that I’m not a fan of Gibson per se.  His movies have been patchy for me, and I don’t think he’s a particularly good actor.  As a director, though, I’ve mostly enjoyed his work.  Braveheart, The Passion of the Christ, and Apocalypto were all very watchable movies, that showed a good range directorially.  Still, with a ten-year gap that includes the career-ending, plummeting trajectory of a meteor, I wondered if he still possessed the chops for a return to moviemaking quality.  Hacksaw Ridge shows some promise of that, but ultimately did nothing for me.

Written by Andrew Knight and Robert Schenkkan, the writing seems like a throwback to the 90s.  Languidly paced to the point of laziness, the movie crawls along at a snail’s pace for most of its 131 minute running time, included a protracted prologue showing a key moment in the childhood development of Desmond Doss, whose religious views were the basis of his Conscientious Objector status.  I didn’t feel this opening was so great, especially since tonally the movie goes from a scene where Doss and his brother are shown as fun loving, close siblings, to one where the young Desmond actually picks up a brick – a brick! – and wallops his brother on the head with it.  I’m not saying that never happened, but laying these scenes back to back gave the opening of the movie an odd, uneven vibe to me.  Fast forward to Doss’s adulthood where he meets future wife Dorothy after he’s saved someone’s life using his belt as a tourniquet, this is where Garfield assumes the role and I have to say, he never convinced me he owned the role.  It’s easy to play a straight good guy role as a gee-whizz, aw-shucks kinda guy, and this is the approach that Garfield has to take because of the script and Gibson’s direction.  I found myself growing tired of the character very early on, so the movie’s appeal really petered out badly for me.  Don’t get me wrong, good guys are good guys, but there are few people in life (even true life heroes) who are simple, two-dimensional goody-two-shoes types, and unfortunately, that is what the cinematic character of Desmond Doss is reduced to.  He’s just not a compelling enough character to build a movie around.  It’s not enough to take a genuine act of heroism and build a framework around it without also constructing strong enough characters to people it.  Almost every character in the movie is flat and uninteresting.  Weaving is a drunk brute of a father, Dorothy a paragon of virtue, Vaughn the tough drill sergeant with a barely hidden sentimental streak.  It’s a movie where all the mean people are changed by Doss’s altruism, because for some reason the movie needs to include Doss’s magical effect upon the psyche of those around him.  It leads to many scenes of snooze-inducing Hollywood schmaltz, the kind of which you’ve seen countless times before.

In an ironic twist, the movie only really comes alive in the scene the movie spends half of its running time building towards: the brutally violent storming of Hacksaw Ridge in Okinawa, Japan.  Ironic because prior to this, the espousing of non-violent engagement is the only real narrative thread.  Once the story moves to the Maeda Escarpment, nicknamed Hacksaw Ridge, Gibson jumps in with two feet, and the resulting battle scenes match Spielberg’s Saving Private Ryan in depicting the horrors of war with gusto.  It’s ironic, true, but worth pointing out that only by showing the gruesome effects of war upon the human body, and the terror that damages the human mind, can one finally understand Doss’s position.  Even though The Bible is his playbook, who can argue the true cost of war?

I feel that with better writers this movie could have shown the true extent of Gibson’s talent as a director, but even though it is being widely celebrated, my opinion is that the movie is being hailed for its message more than anything else.  Taken as a record of historical accuracy it’s likely to be as much Hollywood as any “based on a true story” can be, and as that it never resonated much with me, or struck any nerves it needed to.