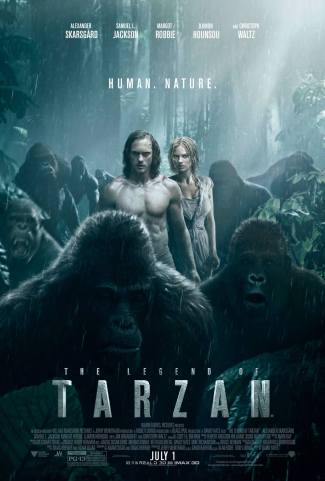 While I only ever read one of Edgar Rice Burroughs’s Tarzan books, I did grow up watching the Johnny Weismuller movies when they would run on BBC2, and I watched quite a bit of the TV show that starred Ron Ely, back in the 70s, and I think I saw the Disney animated movie a few years back.  I even had an idea for a Tarzan screenplay at one point, that would play up a mythical take on the character, removing him somewhat from the action/adventure pulp origins of the character.  Fast forward a couple of decades later, and 2016 sees the release of The Legend Of Tarzan.  I’m curious as to why they bothered.

There’s no other way to say it, other than the movie is a shoddy piece of work from start to finish.  The screenplay, by Adam Cozad and Craig Brewer is a disjointed mess, slipping between the main narrative and the origin story of Tarzan, and how he met Jane.  To be fair, the CGI on the gorillas in all of the scenes they appear in very well done, but they belong to a much better production than this.  The main story is simple – the unseen bad king Leopold of Belgium has bankrupted his country over his hubristic intention to develop the Belgian Congo.  He plans to steal the resources there – a large diamond deposit – and pay his way out of trouble.  But then the subplot arrives in the form of a large tribe, headed up by Djimon Hounsou.  He agrees to help Leopold’s emissary, Rom, played by Christoph Waltz, so long as he can deliver him Tarzan, so an old wrong can be righted.  We then move to London, where Tarzan, now living as Lord Greystoke, is cajoled into joining an expedition to the Congo, to put an end to the slavery in that region.  After that, you can pretty much guess what happens, though I wouldn’t put too much effort into it.  You don’t need to have written a screenplay before to come up with the rest of the movie, and that’s one of the major problems with it: it’s predictable to a fault.  Almost everything that happens in act 3 is telegraphed in both the prologue, and the first half of act 2.  The story has no surprises or twists, just simply a straight walking path from point A to point B.  More of a stroll, really.

But I said the screenplay is just one of the major problems, so I’ll run through the others, in no real order.  Christoph Waltz makes you forget he ever won an Oscar with his performance.  It’s not so much restrained as it is awful.  In many of his scenes, he simply stands around with no facial or body acting – even in the scenes in which he’s supposed to be menacing, he comes off as just not caring about his character at all.  Having seen a number of movies in which he’s appeared, it’s abundantly clear that the only person who can get this guy to perform is Tarantino.  Waltz isn’t a bad actor, but he’s clearly a lazy actor.  Margot Robbie (Suicide Squad’s Harley Quinn) isn’t a bad actor either, but I’m not exactly sure why someone of her rising stature would agree to sign up to play a damsel in distress role.  I found watching it to be demeaning, and I’d feel bad for her if not for the fact that she likely received ten times what I make in one year for this.  Likewise, Sam Jackson can do good work, but in his quest to appear in every movie ever, no matter how bad (Cell, being a good example), he sells out, like Robbie.  His character here is just the comic relief.  That’s all.  A grown man, and mostly respected actor, reduced to what amounts to a throwback to the sidekick roles of yesteryear.  His skin colour isn’t even made mention of – astounding,  given that the story takes place in the late 1800s.  Of course, I’m not saying his race should have been comic relief, but it would certainly have added depth by addressing the incongruity of a black man in Victorian society.  But while Jackson has little depth, Alexander Skarsgard is virtually one dimensional.  His Tarzan is a visual non-entity with a personality that takes a back seat to everyone he shares a scene with.  He’s a stunningly bad choice  for the [badly-written] part.  In the puzzlingly few scenes he shares with Jane, the lack of chemistry between them is noticeable.  I understand that sometimes actors just don’t gel, but the blame on these damp-squib scenes is partially caused by the screenplay itself.  One of these scenes is so badly written, it’s painful to watch: Jane walks through a home in the jungle and listens to Tarzan (unseen) sending her mating calls from other animals, and her dialogue is literally telling the audience what they are.  And the scene has no payoff either.  It could have been played all cutesy – Tarzan and Jane have been at odds since their arrival back in Africa (that would account for the lack of chemistry).  Tarzan might have learned to be refined, but he’s still a wild man at heart.  He’s playful too – he sends out these animal calls, knowing Jane would get it: Tarzan wants to fuck.  She’s disarmed by his humour and is reminded of how hot this guy is, in body AND mind,  why she fell for him.  She follows the various animal calls, and they lead back to the bedroom.   There’s Tarzan with a “Yeah, I fucked up,” expression.  Jane smiles; he’s forgiven.  End of scene.  Suddenly this gives Tarzan a personality, and it breaks the ice between him and his wife.  It also would set up the obligatory subplot where she is kidnapped and he goes to save her.  The scene I just described would have given a lot of authenticity to Tarzan’s feelings about her.  Instead, when she’s kidnapped, that subplot becomes perfunctory and useless, because we’ve never seen any kind of sparks between them, there’s literally no reason to believe these two people mean anything to each other.

And wow, the action too – it’s shot like a TV movie that couldn’t afford a fight choreographer or second unit.  It’s been a long time since I’ve watched action scenes like this.  Everything is bloodless, shot in a weak, insipid manner.  Don’t talk to me about PG-13 movies unless you haven’t seen Captain America Civil War.  PG-13 doesn’t mean unexciting movies for children, but that’s exactly what you get in this movie, despite the story clearly not being for children.  To isolate an element here, beyond the kind of vine-swinging that the Spider Man movies have done a hundred times better, Tarzan exhibits an almost godlike power over thousands of animals in act 3 – yet when his wife was kidnapped, he couldn’t use it then?  So many movies today have these kinds of deus ex machina scenes that it’s just depressing – even more so when audiences forgive them with the phrase “I liked it for what it was.”  Every one of the action scenes feel limp and here, the culprit is squarely David Yates.

Mostly known for his work on a number of the Harry Potter movies, Yates comes in with a certain pedigree: I wasn’t a huge fan of that series, but his movies were capably directed.  In Legend Of Tarzan, Yates expresses a weird fondness of off-kilter close ups and shots where the actors are just static within them.  It feels like the work of someone who has never directed a big budget movie before, like someone who stepped into the part straight from a couple of TV gigs.  It’s maybe one of the worst directing jobs I’ve ever seen, so bad it couldn’t even be called mediocre.  How this movie managed to get any kind of positive buzz is astounding.