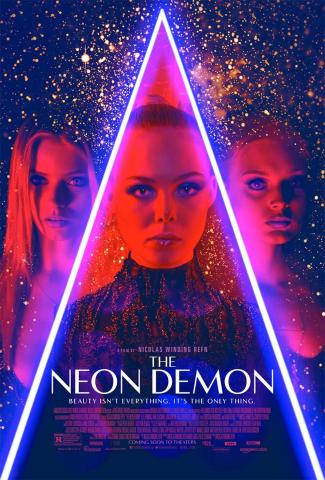 The Neon Demon is one of those self-aggrandizing pieces of cinema fluff that seems designed purely to win  (or at least compete) during awards season.  It’s relatively easy to spot them: they trade in style over substance in both plot and character, and they are darlings of the art-cinema set.  Since moving from Europe to the US, Nicolas Winding Refn has become largely a purveyor of the kind of ponderous languid drama that’s generally hailed by film-school analysts as works of brilliance, and derided by critics as bland, featureless pap.  No secrets here: I’m in the latter camp.  In The Neon Demon, he invites derision from the get go, intentionally or otherwise: not only does the movie throw his name ahead of the credits, when the actual title card appears onscreen it’s also accompanied by his initials in a small vertical strip.  I hate using the word pretentious to describe movies, but I’ll certainly use it here.

While the movie is about the baptismal rebirth of a shy and personality-free 16 year old (played by Elle Fanning) into the glitzy and glamourous life of the LA modeling scene, it’s also a dully obvious allegory into that world itself, where slow tracking shots and drawn out single-camera shots create a sort of mythic idea of the modeling industry, but forget to include any actual scenes of reality.  In this respect, The Neon Demon is as much a failure of trying to lift the veil from the industry as reality show nonsense like America’s Top Model.  The characters in the movie appear to exist only in the scenes captured by the plot; there’s literally no attempt whatsoever to attempt to breathe any kind of life into any of them, with the possible exception of Jena Malone’s Ruby who either works full time as a morgue assistant, applying makeup to corpses, or does it part time to support her full time makeup job for the fashion biz.  It’s not clear why she does it, and when I watched the movie, I got the distinct impression that the morgue job exists solely to support the one scene of lesbian necrophilia (yep) towards the end of Act 2.  It’s like Refn came up with that scene, then backtracked to find some way of fitting it in, because neither that scene, nor any of the preceding morgue scenes does anything to support the archplot, either directly or indirectly.

The choice of Elle Fanning as the main character, Jessie, seems odd to me.  Indeed, the whole concept of a 16 year old character being the focus of the movie makes for an uncomfortable experience, as Refn goes out of his way to oversexualize Jessie, making her the subject of a clumsy, and predictable, lesbian seduction scene straight from what you’d get from any such porno, and a scene that shows her languishing on a couch touching herself up.  These are clearly scenes shot from the vantage point of a male moviemaker, with an unfortunate lack of depth that doesn’t much go beyond that of a music video.  Indeed, because of the subject matter and the shallow plot and characters, watching the movie feels like an endless loop of George Michael’s Too Funky video.  Sure, there are scenes that work, and look terrific (the body painting scene that also features Dexter’s Desmond Harrington as a stereotypical “intense, brooding” photographer), but these generally do almost nothing to further the plot.

And what of the plot?  Well, Jessie – who doesn’t strike me as any kind of great beauty, or in possession of any kind of natural poise – wows all the industry pros she encounters, and on the fast-track to celebrity-model status, incurs the jealousy of two other models, played as vapid cyphers by Bella Heathcote and Abbey Lee.  There’s a weak Lynchian character transformation scene that leads into the second half of the movie, where the former wallflower Jessie suddenly and without any rhyme or reason becomes that creature of poise and beauty.  I don’t object to this kind of content, in fact, I quite enjoy it, and while I just compared it unfavourably to the kind of thing David Lynch has done often in his career, it isn’t badly done here.  What it does do, is prod the plot toward “horror”, because up until that scene it’s been nothing of the sort.

But to describe The Neon Demon as a horror movie is being more than generous.  The pacing never changes after the break from the midpoint, instead, Refn winds the movie down using a number of vaguely connected scenes that imply the fate of Jessie before moving to an extended epilogue that does indeed reveal the fate of Jessie, but it’s too little, it’s too late, it’s too protracted, it’s too powerless, and features characters that Refn forgot to imbue with any sense of personality throughout the movie.  I feel I should point out here that it’s pretty sad to see how Keanu Reeves (John Wick, The Whole Truth) has turned out as an actor.  Okay he was never a great actor, and The Matrix will forever be THAT movie for him, but his cameo appearance as a sleazy motel manager is startlingly poor in terms of line delivery.  Another director might have forced him to do decent work here, but another director likely could have taken a risk on an unknown and gotten either the same performance, or better, than what Refn gets from Reeves.  Given that, like so many other scenes in The Neon Demon, Reeves’s scenes affect the plot almost negligibly, I can’t see the justification for casting him in the first place.

A good segue into the only part of the movie I actually did like – the music score by Cliff Martinez (a former member of the Red Hot Chili Peppers, no less) is pretty fantastic.  The only time the movie seems to rouse from its deep sleep is when the music throbs and pulses in various scenes, a clever mix of light electronica and ambient music that I found to be hypnotically captivating more often than not.

When the movie ended, however, I’m pretty sure I was meant to wipe my brow and gasp aloud “Wow,” at the cinematic treasure that Refn had bestowed upon the world, and I bet there are plenty of people who have watched this paper-thin piece of nonsense and loved it, who will simply think that those who criticize the movie “just don’t get it”.  And that’s okay, because if you love to tack your own fan theories and armchair analysis onto this kind of movie, feel free to do so.  I’m an “emperor has no clothes” kind of movie watcher, I confess.  I don’t mind watching movies and trying to penetrate the intent of the writer and director, but a movie needs to be engaging at the same time.  I was never engaged at any point by The Neon Demon.  The thin fabric of story draped upon the skeletal plot, and peopled with vastly uninteresting characters turned this art-house exercise in style into little more than a two hour music video, an homage to the MTV that used to be.