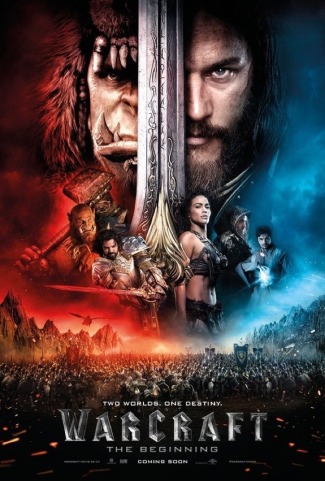 I approached Warcraft with a bit of dubiousness, I admit.  The trailers looked silly and derivative, I’ve never played the game, and the history of cinematic adaptations of videogames (those I’ve seen) ranges from ho-hum to absolute garbage.  While doing some research for this review I had a look at just how many of them there have been, and I was stunned by how many there are and the fact I had heard of most, seen some of them.  Must have crept up on me over the years.  Of those I have seen, both Tomb Raiders – while not all that good – are on the higher end of that spectrum, while the best-forgotten travesty of Super Mario Brothers anchors that chain at the deep end.

Adapting videogames for movies is a thankless task: most videogames have only very basic stories, and most contain stock characters, the kind of which populate many direct-to-Blu Ray genre movies, but they possess that illusive immersive experience that currently can’t yet be managed by movies.  In adapting a videogame for a wide cinematic audience, many times elements need to be added in order to create a story which creates a product that wildly diverges from the source.  In the case of more complex videogames these elements can be seen as more of an extension of the original source, and such is the case with Warcraft.

An odd choice of movie for Duncan Jones (son of the late music icon David Bowie), it feels like a step backward for him having made two reasonably good movies in the past few years – Moon, starring Sam Rockwell, and Source Code, with Jake Gyllenhaal.  Warcraft doesn’t have an especially complex or compelling storyline, or interesting characters, so it’s hard to see why Jones would be attracted to this material, unless he thought it would be a blockbuster springboard to something bigger.  Warcraft doesn’t come close to being that kind of movie.

It isn’t flat out terrible, but almost every element in it is ripe for criticism, after all, we’re not talking a low budget feature here: with a budget of $160 million before global marketing costs, it joins a long list of movies that spend big but do little.  If you’ve played Warcraft, the movie is likely just going to be a curiosity for you, if you’ve never played it, the movie is going to be a simple-minded collection of weary tropes pulled from other genre pieces with medieval-like settings, but in that narrow genre, it’s a lot closer to Dungeons and Dragons than it is to Game of Thrones, or even Lord of the Rings.  It’s hard to tell exactly who the movie is made for – and as seen by its tame box office, audiences never found much within it to connect to.

The story is linear and uninteresting: beefy, tusked orcs invade a different world, ostensibly because their own is dying, and find it defended by its Middle-Earth type monarchy.  Yeah, you’ve seen all of this before: the sweeping CGI vistas of palaces and scenery, hordes of characters in pitched battle with each other.  Nothing new attempted here by Duncan Jones, who also co-wrote the screenplay.  What’s worse is that the CGI in this movie looks cheap, so much so that, other than the close up textures and mocap of the orcs, the movie looks like it was made in the mid 90s.  The non-Orc creatures look fake, the interiors look cheap, the close ups in the battles are terribly choreographed.  Where did the money go?  Not on details, that’s for sure.

The acting is uniformly uninspired too.  Travis Fimmel of TV’s Vikings plays the Viggo Mortensen role in his sleep – the one big emotional scene he’s asked to deliver is either beyond his ability to transcend the awful writing, or he just didn’t care enough to try.  Paula Patton looks good as always, but it’s embarrassing for the production that her portrayal of a half human, half Orc (did I get that right?) doesn’t go for anything other than a human woman painted green with dainty little tusks, and whether there was meant to be chemistry between her and Fimmel’s character, nothing is generated by these actors playing opposite each other.  Dominic Cooper’s performance as the king is so insipid, it perhaps speaks more to Jones’s true ability as a director that he couldn’t wring any water out of that towel.  Cooper, like everyone else, isn’t bad, just uninteresting to varying degrees.

About the only thing I can say I liked was the movie’s visuals when it came to magic used by the Guardian (Ben Foster of 30 Days of Night and X:Men: The Last Stand) and Khadgar (Ben Schnetzer, The Book Thief), just because they reminded me of the Dr Strange comics I enjoyed years ago – oddly enough, the upcoming Marvel Studios movie Dr. Strange has spellcasting visuals that appear reminiscent of what appear in Warcraft!

In the end there’s nothing about Warcraft that distinguishes itself as a movie worth watching, just a mediocre adaptation of a popular video game.  It doesn’t bother to include truly compelling characters or motivations, presenting itself as a simplistic battle of good versus evil.  And it could be it feels like that because the movie chooses not to resolve its main plotline in a vaguely cynical attempt to set up a sequel.  When the end came, I looked back on the two hours that had just gone by as the world’s longest “Previously …” pre-credits sequence.  A real dud.