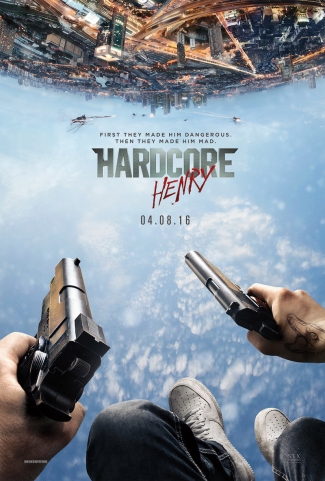 I, like a lot of people, dismissed Hardcore Henry from the trailers as probably too gimmicky to be worthwhile, so I didn’t bother going to see it. I also couldn’t stand the title.  As well as that, I’m not much of a fan of the producer Timur Bekmambetov (Night Watch, Wanted) – no particular reason for that other than I haven’t enjoyed the movies of his I’ve seen.  Months passed, and I had the chance to view a copy the other night.  Feeling the need for a pallet cleanser from The Killing Joke travesty, I fired it up.

Yes, there’s no question that this movie is gimmicky.  I also remembered that brief reviews at the time said there wasn’t much story, and that the movie was violent.  All of this is true.  After I watched it, I broke my cardinal rule of not reading reviews before writing one – only because the Google entry stated that it was “boring” and “unoriginal”, but when I read the review, it was pretty clear from one particular comment the reviewer made that he hadn’t done anything more than sat through it; he hadn’t actually watched the movie.  Likely he went in to it with the same attitude as me – but the results were different.  I ended up enjoying it quite a bit!

If, from the trailers, you haven’t bothered with it either, you might be as surprised by the content as I was.  Knowing as little as I did, I expected a simple-minded first person shooter (the title alone hearkens back to that medium), but it’s actually a well-realized science fiction actioner.  The eponymous Henry wakes up in Robocop-like fashion inside a lab of sorts, where a pretty blonde scientist (Haley Bennett from The Equalizer) gives him some info about his present condition.  The scientist is apparently also his wife, and is the subject of a plot point later.  When the scene moves into the next room, this beginning definitely takes on the feel of a shooter game’s opening intro scene, as we get hit with the story, then the villain makes an entrance, then the hero escapes and starts a small “learning” level.  This for me was not only the least interesting part, it also induced some eye rolling: everything that had originally caused me to ignore this movie in the cinema was apparently true!  I persevered because of one element: I thought the Kurt Cobain looking bad guy was interesting, especially the way he exhibited unexpected telekinetic abilities and because I was thinking, is that Ewan McGregor under that wig … ?  Well, it isn’t, but the telekinesis kept my finger from jabbing the stop button.

From the time Henry is picked up by Sharlto Copley’s (Chappie, District 9) character “Jimmy”, the movie gets going and keeps going.  There’s almost no downtime from act 2 onwards.  I don’t think I’ve seen a movie that moves along as quickly as Hardcore Henry does.  It moves from one hyperkinetic action scene to another, from first person parkour,  to on-foot chases, to vehicular chase scenes, it just keeps going.  And that’s a good thing, because there’s very little plot to appreciate – definitely an element that proves some of the critics right.  Having said that, that doesn’t mean there’s no story, and this is where the difference between plot and story is obvious.  Sure, the story isn’t complex or engrossing, but I liked it just fine for this particular movie.  True, the first half doesn’t have much, but it grows from the midpoint on, especially after Jimmy shows up in numerous guises throughout the movie.  There’s a great reveal about Jimmy that I won’t spoil, but it’s one that pushes the movie more into sci-fi territory than the movie up to that point has done, and I got a kick out of it.  Copley isn’t asked to do much real acting, but I imagine he had tremendous fun with this role – it shows, I think.  His character injects the movie with a degree of humour, and he’s really fun to watch.

I can say that yeah, the movie is entirely first person.  Though I found that, like a 3D movie, once my eyes processed the visual conceit, this didn’t bother me at all and from about 10 minutes in I took it for granted.  Where the movie suffers is in the story, though – there is very little character work going on here.  Other than one short moment, you don’t actually see Henry, only view the action from his eyes, so there’s zero sense of what the character thinks or feels, no reason to want him to succeed.  Everything that happens is presented more or less in real time, like Birdman on speed.  There is no Henry character, just a pair of hands, no real choices for him to make other than kill-escape.  There’s a reveal in act 3 that could have been a subplot the movie could have striven for, but like the rest of the action, it’s less of a key reveal than it is just another plot point.  I can see why most people will hate the movie, but if you appreciate genre movies like I do, there’s enough stuff in here to like.

Especially the violence.  Hardcore Henry is one of the most violent movies I’ve ever seen, with a gigantic body count.  Henry shoots, stabs, slices, shatters, and crushes his way through a massive amount of enemies, and it’s all done exceptionally well.  I have no shame about enjoying violence in movies, especially in the action genre, and this movie delivers that like you wouldn’t believe.  For a first time moviemaker Ilya Naishuller films all of this like a veteran, and with so much gusto it’s impossible not to be swept along by it.  The blood and gore is expertly well done, and the violence, while obviously over the top, retains enough realism that it prevents the movie from just being a live action cartoon.  Some of the action scenes are deliriously well done, and the villain comes to a fitting end.

Depending on how successful the movie ends up being, there’s plenty of reasons to do a sequel – and yes, it would be more of the same, but it isn’t like the movie is defined by any particular story elements as it is.  In fact, a sequel might actually be able to provide a more expansive storyline second time around.  I was totally sold on this movie.  If you’ve read many of my other movie reviews, I might come off as a bit of a snob, but that isn’t the whole truth.  I’m a sucker for certain kinds of movies, and Hardcore Henry had enough material in it for me to enjoy.  Not a great movie, but a pretty entertaining experience that I now wish I’d seen theatrically.

If you loved that hallway scene in Daredevil season 1, or the stairwell scene in season 2, there’s a good chance you’ll enjoy Hardcore Henry as much as I did.