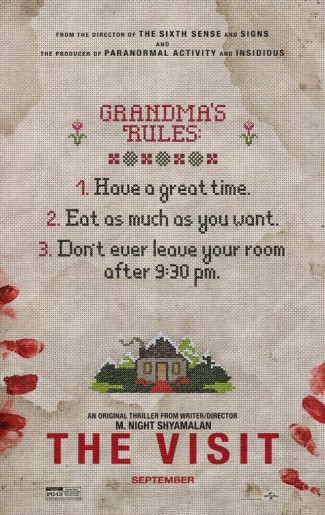 Night Shyamalan’s career is a real horror show itself (not “real horrorshow”).  For someone who built up a crazy amount of goodwill as a moviemaker with 1999’s The Sixth Sense, he appears to have instantly bought into the hype machine at the time, and then proceeded to self-destruct in an explosion of unfounded hubris.  I didn’t care much for the crushingly self-important Unbreakable, but it wasn’t a bad movie.  Signs was an improvement, despite one of the most badly-written endings I can recall seeing, but as the years passed, when producers kept throwing money at him, the movies just got worse.

The Village, Lady in the Water, the stupendously terrible The Happening, his misguided attempt to adapt Avatar: The Last Airbender, and a movie so bad that even The Fresh Prince apologized for it, After Earth, are movies that show some promise in certain scenes, but which pancake under the immense gravity of Shyamalan’s signature writing style.  The Happening is a good example of this.  Following a knockout opening, and a decent premise that wouldn’t have been out of place in a John Wyndham novel, the movie quickly becomes stuffed with ludicrous scenes, dialogue, and acting direction (Betty Buckley being the main victim).  It’s fair to say I’m not a fan here.  Since Signs, he’s seemed out of his depth as a writer, but keeps trying to go bigger each time, maybe in the hope that, like Icarus, he’ll finally hit those heights.

I approached The Visit, then, with a mixture of trepidation and disinterest, and the only reason I decided to watch it was entirely due to seeing some unusually high ratings for someone that is mostly considered washed up these days.   The bad news is, this is not a return to the form of The Sixth Sense, and some of the writing is very poor – the good news is that maybe Shyamalan has rediscovered the touch for smaller, more effective movies.  This guy is not a big picture moviemaker, in fact, he reminds me a lot of Guillermo Del Toro: give these men a blank check and they will make illiterate crap.  Restrict them to smaller, more intimate pieces, and they are very capable of decent work.

Unfortunately, decent is the best adjective I can give The Visit.  On scale of 1 to 10, it’s right in the middle.  It’s neither all that great, but not terrible either.  Technically, I’m a fan of Shyamalan’s visual style.  It’s good-looking and solidly unpretentious, and I feel that when he isn’t overcompensating for his relative lack of writing skills, he’s a decent actor’s director too. This movie shows both the good and the bad of Shyamalan’s range as writer/director throughout.  There are a few giant misfires here in terms of the plot and the writing.  You don’t really have to be a keen movie watcher to predict the key reveal in this movie; it’s clumsy and obvious, and there’s no attempt whatsoever at any kind of Act 3 misdirection. It just is what it is, and when you watch this and think to yourself, “Yeah, that’s exactly what I thought was going on.” It won’t feel like much of a triumph.

Another big issue for me is the stilted precociousness of the two teenage leads (Olivia DeJonge and Ed Oxenbould).  I just could not get around my feelings that these were movie characters, and not “real kids”, and in almost every one if their scenes, I felt yanked out of the movie.  I could not buy the writing of these characters, given the mostly underwritten character of the mother.  I felt all it would have taken for me to believe in these characters would have been for the mother to herself have been written as a genius type so I could believe a trickle-down effect of DNA and upbringing, to not be annoyed by Shyamalan’s brute-force characterization.  Though, to be charitable, there are some great moments of character sprinkled here and there, and I liked them just fine in Act 3, where they finally do feel more completely realized.

The trailers for this movie show some weird creepiness, but once this starts, it doesn’t feel as though it escalates much (I had similar issues with The Hallow), it just kind of plateaus very early in Act 2 and in terms of locale, there are some strong questions you ask during Act 2, not the least of which is, “Well, why don’t the kids just …” and those are pretty big questions, given that Shyamalan has written them with an adult, well-above-average intelligence and strength of personality.

All in all, I found that there were once again so many holes in Shyamalan’s writing that there wasn’t much joy to be had in watching this movie, only a lingering sense that he may finally have turned a corner and might be able to recapture the vast promise of his early career, but also the doubt that all it will really take for him to quickly devolve again is the faintly cautious ego-stroking reviews out there of The Visit.

This review was originally published on 4/18/2016 at https://thatsnotcurrentblog.wordpress.com