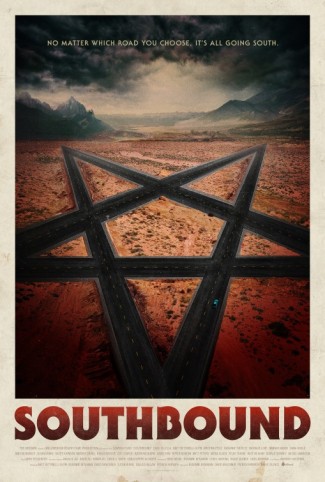 If Southbound feels like part of the V/H/S franchise, the reason for that is not just the obvious anthology format, but the fact that some of the same talent is involved.  Roxanne Benjamin who wrote/directed the Siren segment of this movie was a producer on the first two V/H/S movies, and David Bruckner, who wrote/directed The Accident here also directed Amateur Night in the original V/H/S.  In terms of production quality, freed from the stifling “found footage” format, Southbound is a step up, allowing a much broader storytelling scope.  Side by side, the V/H/S franchise is the ugly sister.  It’s a neat coincidence that I watched this back to back with Carnage Park last night – while vastly different, the American southwest setting tied them together.

But is it any good?  Like every anthology, it’s a mixed bag.  The good thing is that this allows different styles and content to appeal to different audiences, and for the most part I was entertained.  One of the stories seemed underwritten and so frustratingly undeveloped that I questioned its inclusion, but even in that story, there were elements I enjoyed.

As in most anthologies, Southbound contains a framing sequence, a non-linear piece of storytelling that throws up all the questions in its first half, before finally giving the answers in the second half (the final segment of the movie).  These segments are called The Way Out, and The Way In, and in terms of plot, The Way Out has a great Twilight Zone feel to it.  Two men, bloodied up, make it to a roadside diner on a lonely stretch of desert highway, but glimpse hovering, skeletal creatures on the way.  This entire opening is intriguing in pretty much all aspects.  When this part of the segment ends, in a home in the desert, it carries on the weirdness of the diner sequence, and sets up its second half well.

What I liked about this movie were the transitions from one segment to the next.  They all lead into each other organically, instead of using some kind of abstract plot device that reminds you you’re watching an anthology.  One transition in particular, between The Accident and Jailbreak doesn’t feel like it makes a whole lot of sense, but given the entire movie successfully reaches for a weird vibe, I’m okay with it.

Siren is the first of the full stories, and is the one that feels like it could easily have been in one of the V/H/S movies.  Three members of an all-girl rock band break down on the side of the highway while traveling to their next gig and are picked up by an odd, but seemingly harmless middle aged couple.  At dinner that night, weird stuff happens.  Although the weird stuff is pretty predictable from the outset, what I liked about this was the writing and the subtle, untold story of the band’s fourth member.  I’d have liked to have had a little more proof that the women were in a rock band (I don’t doubt they were, but some actual details would have been nice), but the compressed nature of the format probably squeezed it out.  Once the gist of the story is revealed, I wished it could have gone in a different direction because, like I said, it’s pretty predictable.  Mercifully, it leads quickly into the next segment.

The Accident is my favourite of the stories here, mostly because where The Way Out included a Twilight Zone-like plot device, this story feels like a true descendent of The Twilight Zone.  A brief aside here – The original Twilight Zone is one of my favourite TV shows of all time.  Maybe you can recall the poor 80s revival – it failed because it was trying to tell the same kind of stories, but didn’t address the changed audience.  If the Twilight Zone was revived again, on a pay channel like HBO, and given a more adult treatment, it might produce the kind of content of The Accident.   What I liked about this one in particular is that it plays like a short story, and the weird elements are, in context, weirder than any of the other stories.  I also loved the resolution of this story.

Jailbreak, the final self contained story, also has something of a Twilight Zone vibe – that show had a number of episodes where one person would find himself in a particular place, only to discover its true nature.  Well, that’s what this tale is ultimately about, as one older guy comes to the end of his 15 year long search for his missing sister, in the same town which hosts The Accident segment.  This is my least favourite, the underwritten, undeveloped segment I mentioned earlier.  Some of the key elements are promising, but the story felt flimsy and shorter than the others.  An extra 5 to 10 minutes would have let the story breathe – instead it comes and goes too quickly to do it justice to the characters.

The Way In, the final segment (and conclusion to The Way Out) is thematically different to its first half.  A family of husband, wife, and teenage daughter are the victims of a brutal home invasion, perpetrated by three masked men.  The motivation isn’t clear at first – the family seem to be pretty low key and undeserving of what follows, until a key reveal.  When the weirdness kicks in, and the hovering, skeletal creatures appear, a story that’s mostly a well written crime segment becomes less interesting.  The visuals of the creatures didn’t appeal to me at all.  I didn’t like the design and the CGI was too glaringly obvious, and there’s a Lovecraftian aspect to the ending that doesn’t make any sense at all.  It adds exactly zero to the story, and should have been left out.

I went into this movie not really knowing what to expect, other than a southwest-themed horror anthology, and I ended up pretty entertained by it all.  Even the parts I didn’t care too much for, I didn’t dislike them enough for it to bother me.

Recommended if you generally like this kind of format.