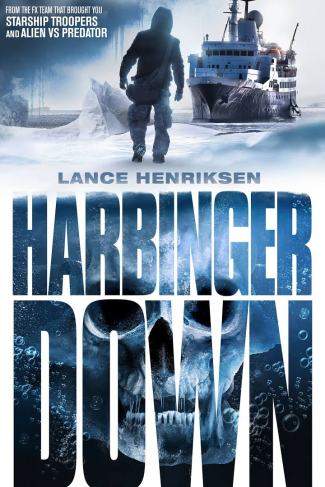 It’s not often a movie makes me angry.  I think a recent honour goes to Josh Trank’s inexcusable Fantastic Four effort, but tonight I witnessed something that truly made my blood boil – Harbinger Down, written and directed by special effects technician Alec Gillis.  I actually saw this included in a couple of best of lists, but it got some bad ratings in other places.  Having watched it, I can only think that there are people out there who are so starved for entertainment that they give basically anything a passing grade.  Harbinger Down deserves no plaudits whatsoever.  It’s actually one of the most disgraceful movies I’ve ever seen.

And I say disgraceful with no measure of hyperbole, and I’ll explain why.  Simply put, this is a bad remake of John Carpenter’s classic The Thing.  I’ve seen bad Thing-inspired movies before.  Leviathan comes to mind, and The Thing prequel-that-might-as-well-have-been-a-remake was pretty crap too, but Harbinger Down is disgraceful because Alec Gillis took people’s money and in return gave the investors who funded this a pretty despicable bait and switch.

Gillis is credited as the writer and director and designer of the “practical creature effects”, and he couldn’t have delivered anything more shocking than this movie.  There is so much material stolen from The Thing that John Carpenter should sue this guy for a share of the profits, if there ever is any.  From the opening shot of a space craft hurtling through space toward Earth (with a 1982 date reference that I’m sure Gillis thinks is a clever nod to The Thing), to a black character saying “voodoo bullshit”, to a Chess Master game seen in one shot, to the “practical” adjective regarding the effects (if you don’t know, The Thing is considered to have some of the best “practical” effects in the genre, with Rob Bottin creating truly legendary work), to the actual plot itself, it’s a nauseating work.  I know, I realize that I’m sounding like a pitbull straining at the leash, but I can’t express how much I truly hate this movie.  I just can’t get over the balls it takes to write a script like this and show it to people.  It’s like a teen deciding to write his first screenplay, but all he can come up with is a variation on his favourite movie.  It’s, frankly, embarrassing that Gillis, who has been in the biz for a number of years, came up with something this unambitious, something so bereft of actual creativity, something so lacking in imagination, and took people’s money to actually make it.  It’s been 34 years since The Thing, and this is the best he can do?  Has he no shame?

I can’t single out the cast for my bile – they actually don’t do a bad job at all with material that I wouldn’t print on toilet paper.  And the photography is serviceable.  The whole production looks like it had maybe a $3M – 5M budget, and In terms of directing, Gillis isn’t so bad either.  But every other element is so crippled by the insane folly of, essentially, remaking one of the greatest movies the genre has ever seen.  It makes me wonder if Gillis has nothing but hate and contempt for it.  Sitting through this is like seeing a madman throw acid in the face of a beautiful woman.

I really hate writing this review.  I have so much anger about this that I don’t think would subside in a day or so, and when I look back at, I might think I was a real dick to be so over-the-edge, but it isn’t like I get paid to write these things.  After all’s said and done, I’m a gigantic fan of The Thing, and I think for anyone else who is, watching Harbinger Down is going to feel as if they were spat on.

2 thoughts on “Movie Review: HARBINGER DOWN”