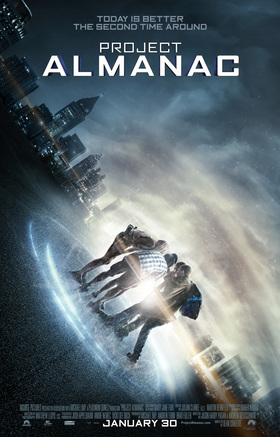 I’ll give myself a bit of an out here: I love time travel fiction. Love it, paradoxes and all. I don’t love many of the executions of the genre, and some of the details bug the hell out of me. Even Looper, which was mostly a great movie, bugged the hell out of me in the same way that Frequency (which is kind of a time travel movie) did. Well, the same stupid visual device in those movies exist in Project Almanac, a movie that at times contains some of the stupidest writing I’ve watched in a long time.

I kind of knew going in that this was not a thinking man’s time travel movie – for one, it’s from “MTV Films”, and the kick in the balls is that it lists Michael Bay as a producer. So yeah, complaining about this kind of movie is like slathering yourself in honey and being pissed about getting eaten by ants.

In the movie, a proto-genius highschooler finds his deceased father’s blueprints to a time machine.  He and his friends build it and when they finally get it right, they decide to use it for their own benefit in a series of mildly humourous scenes, but ultimately, this is a “things man was not meant to know” anti-science movie, and so its purpose shifts from illuminating to cautioning, which is an annoyingly lazy trope to fall back on.

But the most disappointing thing is, the movie starts promising enough. It sets up the main character well, and for an MTV movie, the rest of the cast is surprisingly well rounded and okay. The teens are not presented as one-note nerds, bros, potheads or partiers, they seem like actual teens, and the acting isn’t too bad. There wasn’t a character in the movie I disliked. Unfortunately the movie falls apart pretty quickly. The found-footage conceit is EVEN more pointless than it was in [the infinitely better] Chronicle, with most scenes where the captured footage seemed REALLY forced. Like Chronicle there’s no actual reason for this to be a found footage movie AT ALL. And then there’s the story itself, which doesn’t really know if it wants to be a Chronicle-type cool story about these characters discovering something that changes their lives for better or worse, or just a reboot of the old Kutcher movie The Butterfly Effect, so it ends up being a pale imitation of both. It could have been a pretty good movie, but it ended up not playing to the strength of its premise whatsoever and wasted a good opportunity.