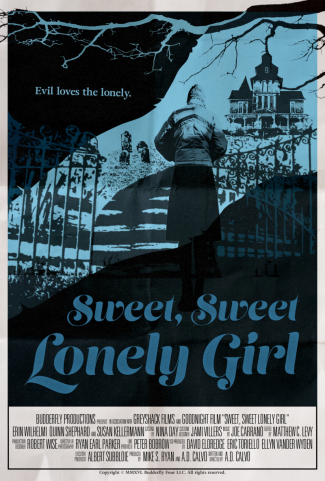 I’m hard to please when it comes to movies, I admit.  But I’m not an unduly harsh critic, I don’t think.  I know what I like, and I know what works for me in a movie, especially in the horror genre.  In my recent review of Lavender, a “vengeful ghost” movie, I said that entries in the horror genre need not terrify, but they should at least have a noticeable “creep” factor.  Let’s face it, it’s tough to actually terrify an audience these days, which is why so many horror movies rely – too much – on the jump scare.  Done right, it enhances a horror movie, but in many cases, lack of atmosphere and good, old fashioned decent writing leads to the jump scare to carry the weight of the horror movie on its weak shoulders.  But what happens if you create a horror movie that has neither atmosphere, nor jump scares?  You end up with a movie like Lavender, and one I watched the other night, Sweet, Sweet Lonely Girl, written and directed by A.D Calvo, who I’d never heard of before.

Off the bat, I can tell you I didn’t like the title, and I was only semi interested in the image of two girls kissing (it’s so daring these days, right?) from a still I’d seen – but the movie poster was intriguing (see above) and the tagline “Evil loves the lonely.”  I was intrigued by that.  I’m drawn to creating characters who are sad, lonely, broken in some ways, and I feel the best horror shows that kind of drifting character as the target of the monster, whether it be of supernatural or human origin.  The hugely gothic image of the poster – a young woman looking up at a Victorian house – seemed very reminiscent of Psycho too.  I didn’t know what the movie was about, but interested enough to check it out.

Running a lean 76 minutes, the movie feels a lot longer than that, unfortunately, for much the same reasons as Lavender: it’s ponderously slow, and not much of anything really happens in it.  Some elements work, but the big ones don’t.

The movie is about a young woman, Adele, played by Erin Wilhelmi, who is sent to be her aunt Dora’s caregiver.  Adele’s home life seems pretty depressing, but it’s never fully explored.  She’s sent there in order to ingratiate herself into the aunt’s life, in the hope that Dora will look on them kindly in her will.  Dora suffers from agoraphobia and a heart condition, and the feeling is, she won’t have long to go.  However, when Adele gets there, she finds Dora is rude and dismissive, and the large Victorian era house seems even more depressing than her home life.  When Adele encounters mysterious, dark haired beauty, Beth (Quinn Shephard), the shy, retiring Adele begins to come out of her shell, but then comes to realize that Beth is not the woman she appears to be.

So what’s good about this movie?  There are a couple of things – the movie is set in the 80s, thanks to some news footage of Ronald Reagan in one scene, but oddly enough, it feels like it’s actually set in the 70s, judging by the songs on the soundtrack, and the vehicles – not to mention Adele’s clothing.  Small quibble, though – like The Love Witch, it feels authentically set in that period.  The only anachronism I noticed is a parked car that’s clearly modern era.  The production design is good too, adding to the period feel.  I also like the somewhat dour colour palette used.  And in terms of the performances, I can’t fault either Wilhelmi or Shephard, who are good with the material they have.  Adele carries the movie, but she’s an open book as written by Calvo, imbued with a sense of depth but nothing really more than that.  Beth is less well defined, existing as nothing more than a mysterious vamp, with intentions that unclear and never resolved, or at least poorly resolved.  If there was a specific point to making Beth a female character other than the brief titillation of seeing two girls kissing, it was lost on me.  The relationship between them felt forced and mostly artificial for me.

What’s not so good is the pacing – it’s flat out awful.  The movie crawls along at a snail’s pace with almost no attention paid to the speed of the scenes in the movie.  I couldn’t detect any kind of directorial influence over this aspect of the movie, so the blame for this goes to Calvo himself, not editor Matthew Levy.  For anyone who might be thinking I’m complaining there weren’t enough jump scares, that isn’t what I’m referring to, simply the overall pacing of the scenes.  And while that’s got a lot to do with content, it’s also about understanding the nature of conflict, and how each scene needs to have some degree in it.  In the movie the level of conflict in so many scenes is so low as to be almost negligible. That’s bad enough, but the biggest problem I had with the movie is that it’s a real stretch to call this a horror movie.  Remember that logline, “Evil loves the lonely”?  Sure, there’s no question that Beth, whoever, or whatever she is, latches on to Adele and leads her morally astray (a little), but there’s no real reason why, and Beth isn’t even depicted as a bad girl, much less an evil one.  I never got any sense of Beth’s purpose, other than a very mild reminder of the creature that names itself Alma Mobley (and various other names) from Peter Straub’s Ghost Story.  Beth is written with mysterious shallowness, and nothing else.  There’s a scene where she eats a pomegranate with some kind of malevolent gusto, but coming when it does in the movie, it’s too late, and by then completely out of character.

The ending, when it comes, is similarly vague and unformed.  Some elements hint at a clear supernatural focus, but like the rest of the movie, they’re handled with a homogenous blandness by Calvo to the point where they are completely unengaging.

It’s easy to see where the movie could have been tightened up, but in order to deliver a genuinely intriguing piece, so much of the screenplay would need such a drastic overhaul it wouldn’t resemble the movie that ended up getting filmed.