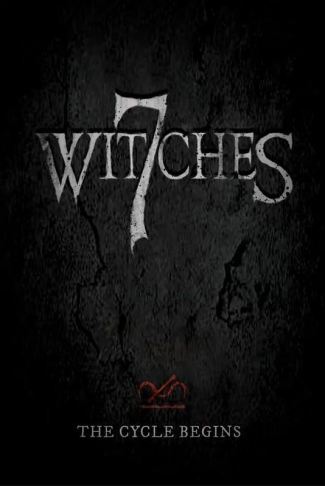 One of my favourite horror elements is that of black magic, specifically witchcraft, and specifically performed by witches.  I never really took too much to the idea of wizards or warlocks – there’s just something about female practitioners of black magic that appeals to me, they seem darker, somehow.  Not that men can’t – the real world has a much higher ration of evil men to evil women, and maybe that’s where the appeal lies; it’s different in the world of the supernatural.  And I will be even more specific here – I prefer younger witches to the old ones.  Like the archetype of the vampire, there’s a strongly sexual appeal in the youthful-looking witch image.  They’re women who yield power confidently, unafraid, unrestrained.  I’ve always had a thing for Samantha from Bewitched, and Samantha Robinson as The Love Witch is about as sexy (and sociopathic) a practitioner as you could possibly find.  The movie 7 Witches features a another darkly sppealing witch, as part of a familial coven.  I watched this movie last night, knowing nothing about it, arriving as it did from a mysterious benefactor …

Right off the bat, I’ll tell you this is a low budget indie, and it has none of the polish of a Mickey Keating or Aaron Moorhead-Justin Benson movie, but it has something, and that sets it apart from its peers.  Ultimately, the movie wasn’t a big hit for me, but I was able to see a lot of potential in the 71 minute running time – enough to make me wish it had been longer.

The story opens following a literal witchhunt in a rural area in what’s probably meant to be the early 1800s.  A couple of young female witches are hunted down by a group of masked men with rifles, then the movie flashes forward to present day, where Kate (Persephone Apostolou, hands down the movie’s best performer) travels to attend the wedding of her younger sister Rose (Danika Golombek) to black-clad Aggie (Megan Hensley).  What Kate and her family don’t know is that Aggie is part of a coven, who look to also be a blood-related family, and that Rose, a girl with a troubled past, has committed herself to Aggie in more ways than just simple love.  Kate, a flinty woman with issues of her own, keeps everyone else at arm’s length, and it’s this need to distance herself from others that allows herself to see that something weird is going on as the wedding day approaches.

That’s the plot in a nutshell.  The opening, and general look and feel of the movie is slightly evocative of last year’s masterpiece The Witch.  It’s a movie of very little humour, and the austerity of the location (it was filmed in Washington state, and looks like it) is complimented by a bleak, washed-out colour palette.  In addition, Aggie’s family dress exclusively in black, in clothing from another era, which I absolutely loved.  Though one of the many script failures of the script is that nobody on Kate’s side addresses this, or shares their concerns about what Rose is getting herself into.  It’s largely indicative of the movie as a whole, where there’s almost no development of the ancillary characters to the point of imbuing them with any sense of real human personality.  Kate, and Paula (an older woman in Rose’s wedding party) are well defined, but the other characters less so in quickly descending fashion.  I liked Aggie a lot, but I wanted to understand more about her character, though very little actually comes through.  Of the two lead male actors, Rory Ross who plays Aggie’s malevolent brother Henry, fares better than Kate’s former boyfriend Cody, played by Mike Jones.  At first Jones’s performance is promising (he also looks a little like an early 90s Brad Pitt at times), but either because of acting ability or poor direction, he quickly just becomes fairly anonymous.  He does get the best scene in the movie, however, a trippy menage a trois scene in the woods with Rose and Aggie – and not just because he’s being seduced by two good looking young women; the scene is overlong, but I enjoyed the technique employed in shooting it.

I will say though, that I did not like the score, by Brady Hall, who also co-wrote (with Ed Dougherty), and directed.  It’s an interesting choice of music for sure, and it works early in the movie, but deeper into the movie it was way too distracting, and at times it was tonally all over the place, so much so that I found it to be the primary detracting element of the movie.

The other big thing the movie has going against it is the running time.  This is a movie with a situation and characters that really cry out for greater development.  Taking the end credit roll away, the movie is closer to 68 minutes, and it feels much, much too short.  I don’t know how much the movie was made for (between $50K and $75K, I’d say), but an extra twenty minutes of story and character development would have made a HUGE difference, and I’m thinking wouldn’t have cost that much more to shoot.

Act 3 does contain some unexpected and welcome brutality and effects, and it comes at exactly the right time in the movie, because it doesn’t just increase the stakes for Kate, it catapults the story to another level in terms of plot and character, especially that of the coven, and I thought it worked really well indeed. There’s a fine piece of writing in Kate and Rose’s final scene that’s entirely consistent with Kate’s character up to that point of the movie, so it was more than a little disappointing to me that the story ended the way it did – As Kate pursues a particular character in the last few minutes, I was hoping the story would take another sharp turn and do something off the wall, but it settles for a conclusion that’s the expected one.  I don’t mean predictable as such, just the ending you’d expect.

7 Witches is a movie where the whole is not greater than the sum of its parts, and largely it’s down to the short running time (also, the tag line “The Cycle Begins” is unnecessary and sounds dumb and cheesy).  Individual scenes and technical elements are actually very good indeed, but Hall and Dougherty failed to give their story the breathing room it deserved.

22 thoughts on “Movie Review: 7 WITCHES – low budget and a waaaaay too short running time dilute this indie horror’s potential. Could, and should, have been better.”